Although hand sewn homespun cloth bags were used for grain, feed, sugar, and flour from the early 1800s, the invention of the sewing machine in the mid 1800s made stitching quicker and seams stronger. Textile mills began producing inexpensive cotton fabric for feedsacks. Bags soon went from homemade and reused to mass-produced and the markings on the bags went from farmers’ brands to the brands of the commodity producers. When these bags were empty, penny-wise farm wives found them to be useful as inexpensive fabric for household purposes.

In the 1920s, feedsacks, previously made of cotton without decoration other than a brand, started to be produced in prints. If the thrifty housewife could use the cloth bag as well as its contents, wouldn’t she want it even more if it were pretty? The answer was a resounding yes, and a great variety of prints went into production. Many were multicolor florals, but there were also solids, stripes and other geometric patterns as well as novelty prints. Since the sack fabric became clothing, towels, aprons, pillow cases, toys, laundry bags, curtains, quilts, table cloths and diapers, a variety of prints were called for. The commodity suppliers’ branding was still present, but on a removable paper label.

Feedsack fabric only gained popularity and usefulness during the Great Depression and World War II. Some of the novelty prints on feedsacks of the time include comic book and cartoon characters, movies and popular children’s book themes. A most timely print depicted events, people and locations of WWII.

The popularity of the feedsack started to decline after The War, with new paper sacks and plastic containers providing less expensive and more sanitary packaging. By the late 1940s, half the fabric sack market had been cornered by new forms of packaging, and by the end of the 50s, the fabric feedsack had almost completely disappeared.

The charming prints, the sheer variety produced, the connection to our resourceful mothers and grandmothers—all have made the collecting of vintage feedsacks very popular today. 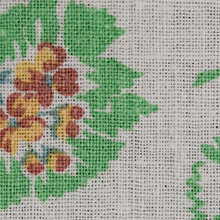