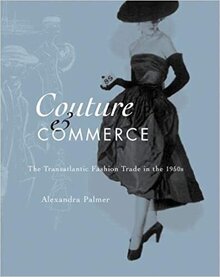 Let’s face it, the world of couture clothing has not been a rare subject for publication lately as probably more has been written on the subject this past decade than all combined from previous generations. Palmer’s book however, focuses on the real mechanics of couture from design to sale, and its practical use by real women.

First of all, the pragmatic definitions of fashion: haute couture, couture, designer, bonded model, toile, pattern, licensed copy, “adaption”, boutique, prêt-a-porter, and the other various terms are delineated in the book (although not readily) – and that itself is not an easy task.

Although this information is useful, it is the context of what fashion is that is fascinating, especially within the context of Toronto’s society women of the 1950s as set forth by Palmer. The concept one has of couture from the pages of Vogue is often remote from the reality of its purchase, wear, and re-wear. I was surprised that one illustrated example of a dress model entitled “Espoirs perdus”, as drawn by Balmain in 1956, was substantially redesigned in the couture house by its vendeuse and client, resulting in a dress that had little similarity to Balmain’s vision. As Palmer points out “The ability of a client to redesign is an aspect of haute couture that has been largely overlooked in favour of promoting the designer as artist and quintessential arbiter of taste.”

Retailers too had power to change designs to better suit the tastes and needs of their local clients. Bonded models, toiles or patterns could be purchased with an understanding to alter button sizes, materials, pocket placement and colours of original dress designs. Many of these surprising revelations are tied to the reality of the post World War 2 economy, as Palmer points out “Before the war, private clients had been of key importance to the couture houses. This changed dramatically postwar, when the big buyers were American stores and manufacturers purchasing primarily for copying.” Palmer points out too that the newly formed House of Dior in 1947 best understood these changes in the postwar world of couture, and suggests it was Dior’s assessment of the changing world that was primarily the reason for his huge success, evident by the mid 1950s when Dior’s fashions accounted for over half the total of couture exports, and 5 percent of all French export!

Couture is brought home in the book, as extant examples from the Royal Ontario Museum are illustrated (at times not well), with their histories from the women who wore them. Although at times leaning on the side of chatty gossip, the book attempts to understand what these dresses meant to the women who wore them. Couture gowns and suits purchased as far away as Paris, but more often acquired from the St. Regis Room of the Simpson’s department store in Toronto, or the elite clothier Holt Renfrew in the late 1940s were commonly donned annually throughout the 1950s. The concept of fashion as a season or two in length was irrelevant to many of its wearers who vied for the same designs as those worn by international fashion icons, like Wallis Simpson or Marlene Dietrich. Sometimes this seems possible through the conservative clothes chosen by retailers to offer locally to Toronto women who could wear a subdued suit by Sybil Connelly or Hardy Amies for many years to many functions, however, glamorous evening clothes from Jacques Fath and Balenciaga are just as evident in the book, with similar histories of repeated wearings.

Couture and Commerce may not be the first choice by fashionistas who wish to ooze over the creations of couturiers, and laud designers as gods of style, but it is an excellent book for those who wish to understand the world of couture and how it worked from postwar era London runways and Paris ateliers, through its various methods of dissemination and alteration to the wearing public. Alexandra puts a face to couture — the real women who chose and wore the creations of Paris and London and how they acquired what they wore, and what it meant to them.

An interesting appendice at the end of the book deciphers today’s costs of a couture dress or suit. For example, in 1950, a dress from Molyneux which sold for about $150.00, translates into about $1800.00 of today’s money. That may be the cost of the dress, but its value was far more.