“The sea can bring enchanted ships, half-welcomed invaders of open hearts”: with copy like that, you know the editorial you’re about to see is a trip! And if you want trippy, you want Tzaims Luksus (and that first name is pronounced like “James” with a Z)…
⠀
Luksus was at the forefront of high-fashion, experimental textile design in the 1960s. He was born in Chicago and studied architecture and art in Philadelphia; he mainly worked there and in Bennington, Vermont. After an inspirational trip to Greece led him to concentrate on fabric design and manufacture, Luksus made a big splash in 1962 with tie-dyed chiffon, many moons before that was a groovy thing. His wild (and expensive) patterns were used by prominent American designers and firms: Burke-Amey, Donald Brooks, Geoffrey Beene, Sarmi, Norman Norell, Pauline Trigère, Mollie Parnis, Gus Tassell, James Galanos, and more. Norell proclaimed him the man who could “pave the way for a big American breakthrough in fabrics” and Beene said his avant-garde vibe was ahead of the pack by at least a decade!

Luksus prints have that quality of “what comes around goes around” nostalgia for Art Nouveau and earlier decorative art movements. After launching his own line in 1966, he changed his mind about the fashion biz, closing up shop in 1968. He refocused on art, though still designed fabrics—but his “fabric fame flame” burned bright and extinguished fast. He won many awards, was unusually lauded in his time, and is basically now forgotten…except for by textile freaks like me!
⠀
Feast your eyes on a Teal Traina evening dress of Luksus’s “yards of billowy silk organza burnished with the colors of a desert sunset.” (Harper’s Bazaar December 1969) What a marvelous color sense he has—like a vacation for your eyes! 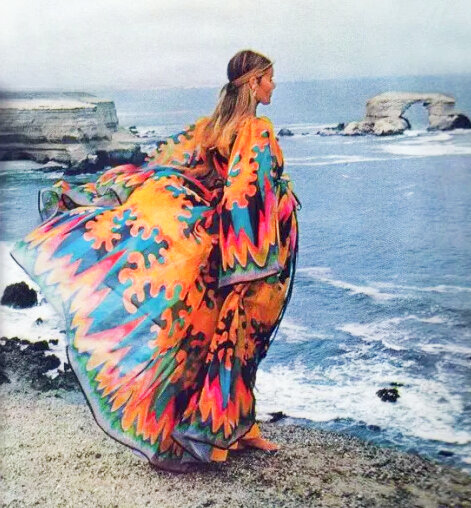 Written by Leigh Wishner, who is on Instagram (@patternplayusa) where this article first appeared.

Pattern Play USA: Devoted to the study and appreciation of 20th-century American textiles and the stories behind them. Book project in progress.