A recently-discovered archive of fashion, photographs and letters relating to the tragic Queen Ranavalona III was recently unearthed by a British family during a house move. 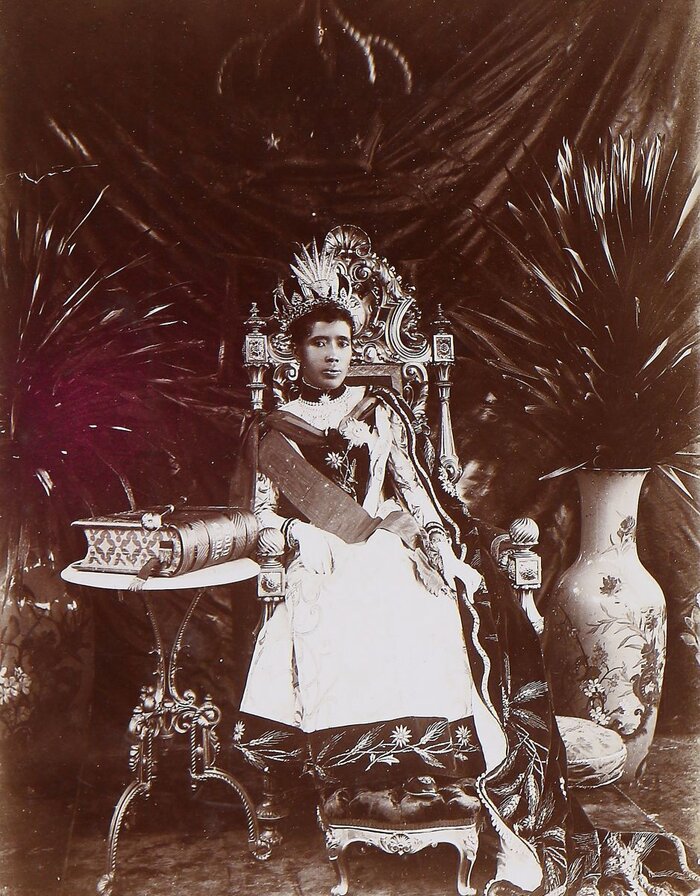 In 1895 France invaded and annexed the island of Madagascar, abolished the monarchy and in 1897 Queen Ranavalona III was sent into exile to the island of Réunion. She was accompanied by her close family and a handful of servants including her loyal paid companion – Miss Clara Herbert. A devout protestant, Miss Herbert (b.1871) was a descendent of the Herberts of Muckross House, Co. Kerry, Ireland. A lady of genteel upbringing, but little money, she was a talented linguist and sought employment as a paid companion. Clara was fluent in French, Malagasy and seven Chinese dialects. According to her family she worked for the Madagascan Royal family from the late 1890s until the early 1920s, accompanying them through their trials, tribulations and adventures. 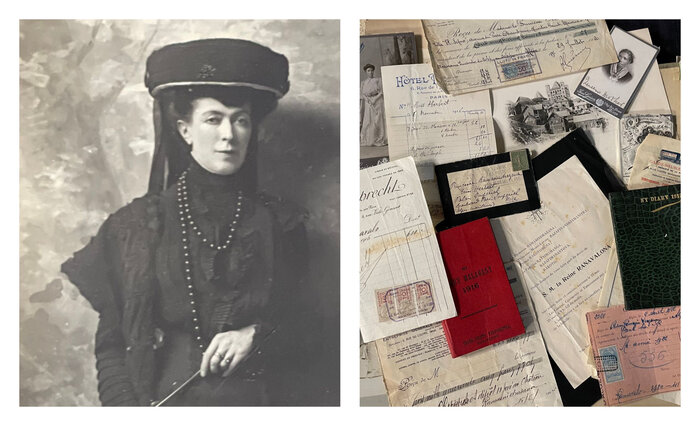 The archive so carefully compiled and preserved by Miss Herbert gives a glimpse into the lives of the Queen and the women who surrounded her and includes poignant images of Ranavalona, seated regally on her throne in Madagascar during the last days of her reign. Her crown (presumably seized as booty by the French) is now in the Musée de l’Armée, Paris. Photographed in Réunion in the early days of her captivity, she looks thin, downcast and stands outside a palatial wooden villa with her mother and influential aunt – Princess Ramisindrazana and nephew (in the bowler hat), Prince Rakotomena. 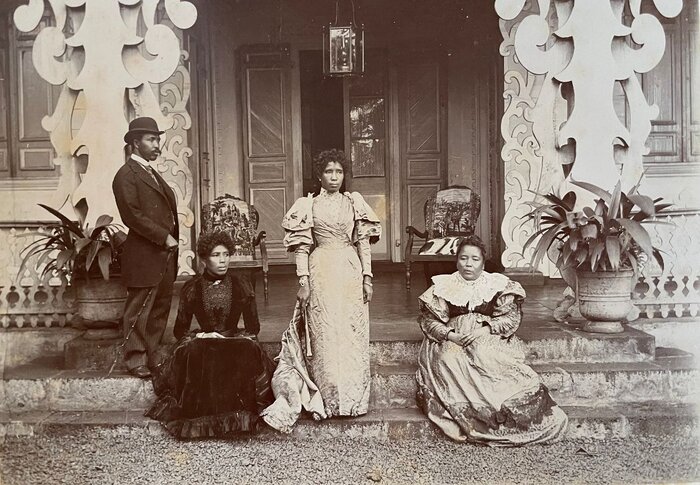 The family in exile on Réunion

They were to be incarcerated there for two years. Also joining them was her older sister Princess Rasendranoro (1860-1901), and her two children – Prince Rakotomena, and Princess Razafinandriamanitra. The fourteen-year-old princess was nine months pregnant with the illegitimate child of a French soldier. Two days after arriving at Réunion, Razafinandriamanitra gave birth to a daughter, but the labour and journey had been too much for her and she died 5 days later. The infant Marie Louise was duly adopted by Queen Ranavalona and eventually was made her heir as she had no children of her own. 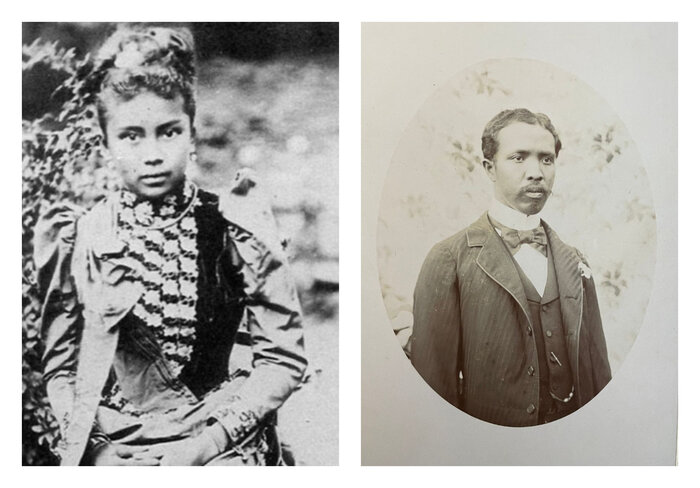 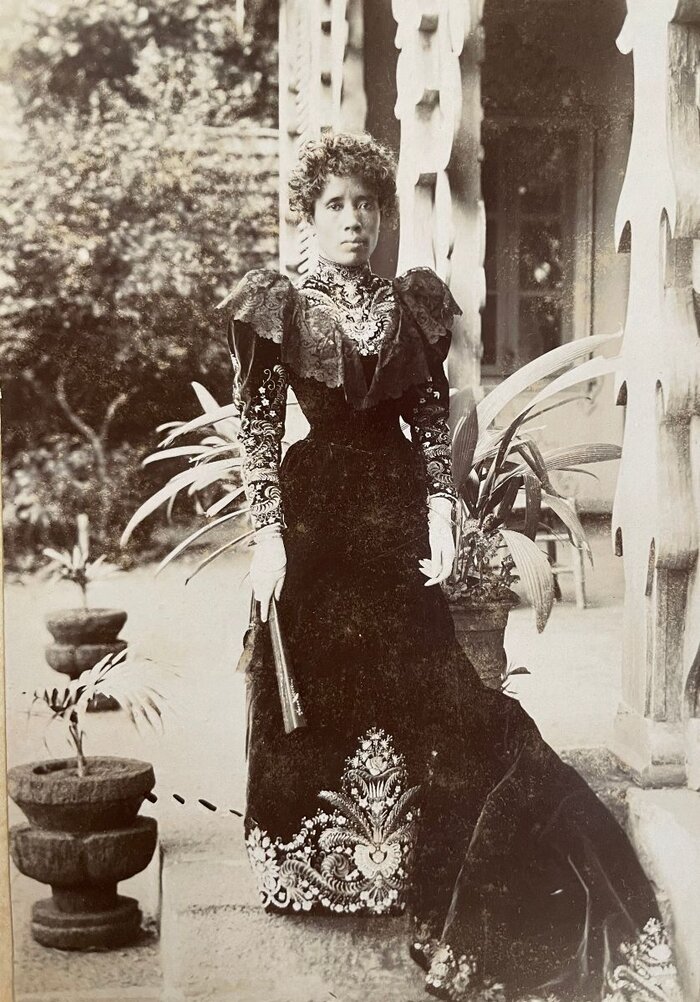 The Queen was supported as always by her influential Aunt – Ramisindrazana, who had acted as her political advisor during her reign and had been something of a thorn in the side of the French authorities. She was blamed for organizing and inciting Madagascan rebellions against the French colonialists, and although many of her male conspirators were executed, they balked at killing a woman, so she was packed off to Réunion with the Queen instead. 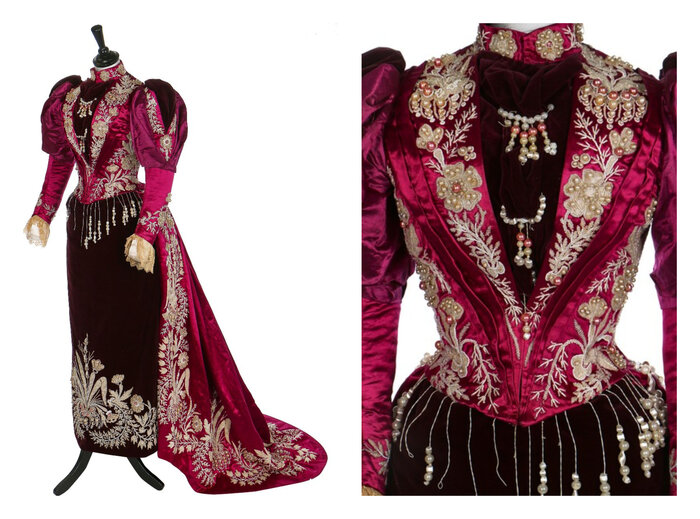 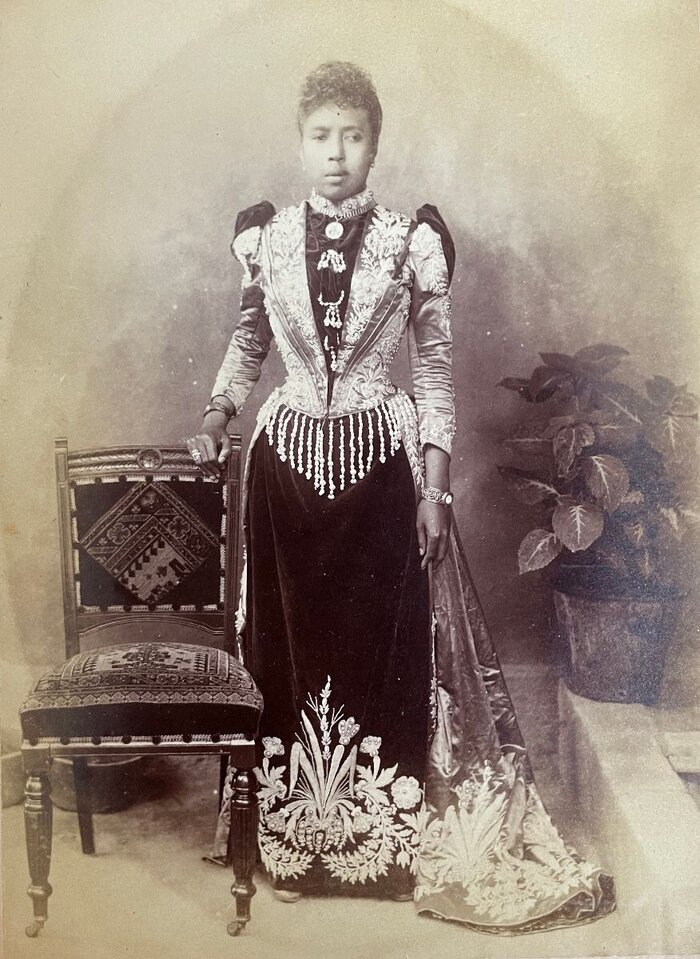 Ranavalona’s much older husband, Prime Minister Rainilaiarivony, died within the first year on Réunion. In Madagascar, it had been the tradition that the Queen married the Prime Minister. Indeed, he had been married to the two previous Queens and it was rumoured that he had poisoned Ranavalona’s first husband (making her a widow at just 22), when it seemed likely she would accede to the throne after the death of her aunt Queen Ranavalona II. However, this group of strong women managed perfectly well without him! 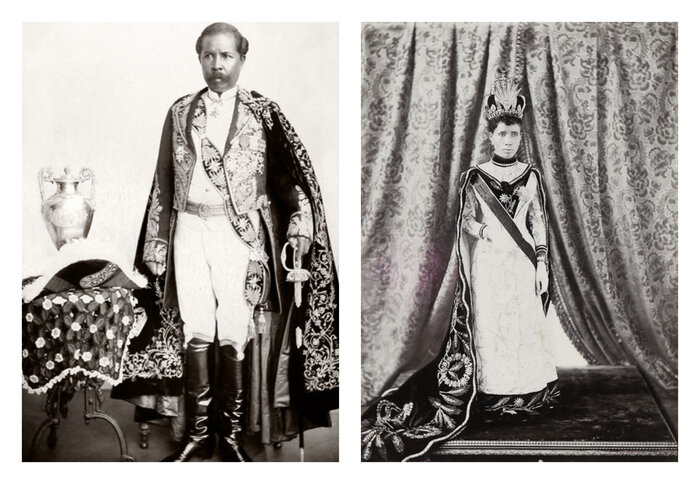 The French authorities, nervous of new uprisings in Madagascar, decided to put more distance between the Queen and her people. In 1899, the Queen and her entourage were peremptorily ordered to board a ship bound for France. The Queen was pleased as she hoped to be exiled in Paris (she liked to order clothes from French couture houses), but upon docking in Marseilles she learned that their final destination was to be Algeria. She burst into tears and declared, ‘Who is certain of tomorrow? Only yesterday I was a queen; today I am simply an unhappy, broken-hearted woman.’ 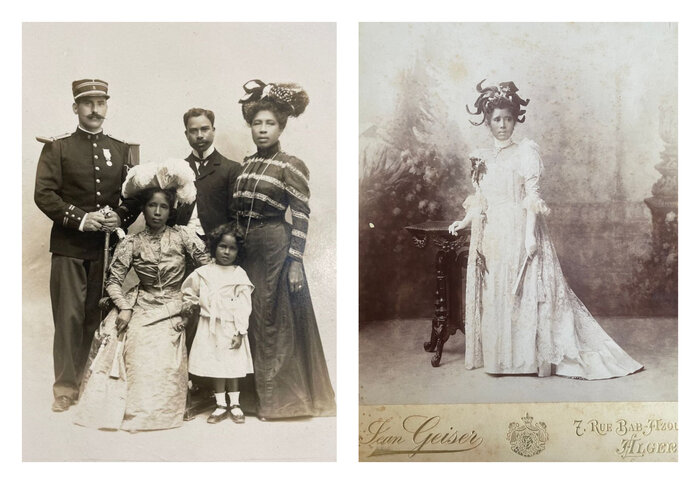 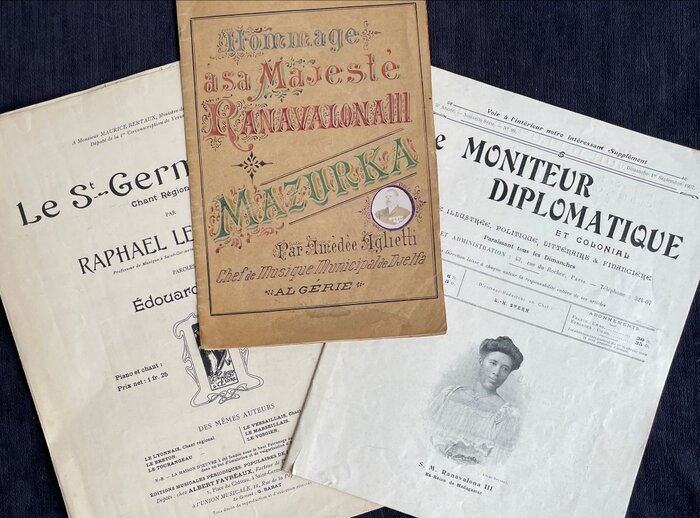 However, Algeria wasn’t too bad – it had a sophisticated and thriving social life and the Queen soon became something of a cause célèbre. The archive includes musical programmes dedicated to her. 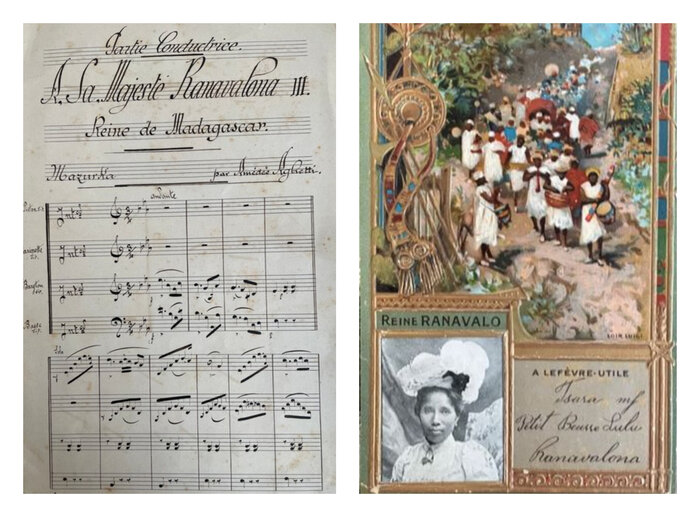 The Queen and her entourage were eventually allowed to visit France for the first time in 1901 for holidays and shopping trips where they were followed and photographed by the press. She became hugely popular with the general public who complained of France’s harsh treatment of the Queen and campaigned to increase her relatively meagre living allowance. Her picture even appeared on bars of chocolate! Photographs of Ranavalona and Ramisindrazana around 1905 show them dressed in French finery, looking relaxed and happy and almost unrecognizable from the photographs taken in Réunion some years earlier. 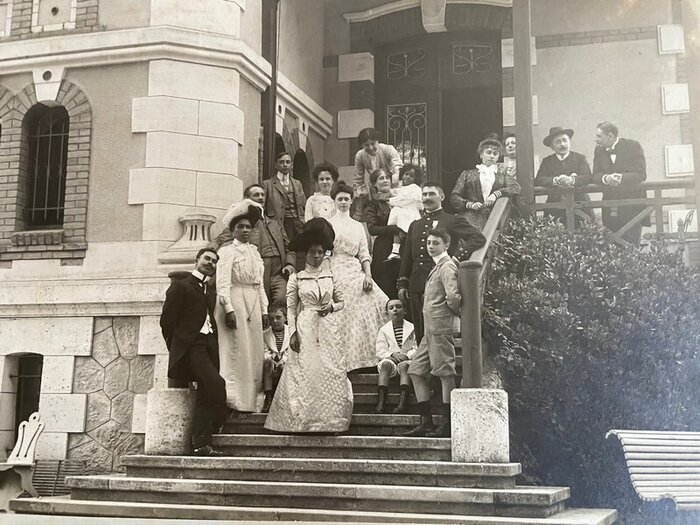 Queen Ranavalona III on holiday in France, circa 1903 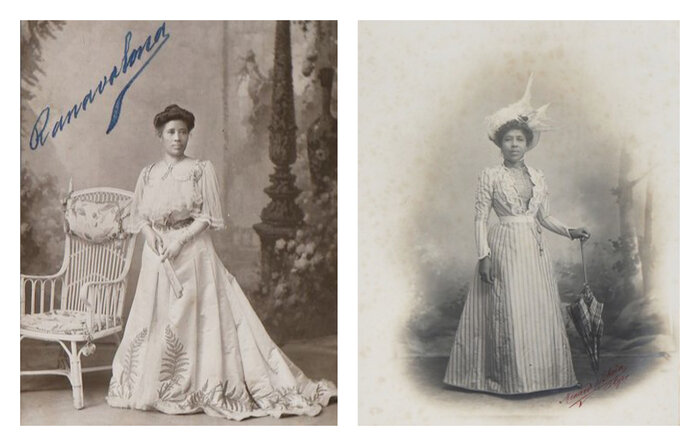 Her older sister died in Algiers in 1901, as did the Queen herself of an embolism in 1917 and the archive includes invitations to her funeral as well as the exhumation certificates for Princess Rasendranoro in 1907. Queen Ranavalona was also later exhumed and re-interred in the tomb of Queen Rasoherina at the Rova of Antananarivo in Madagascar. Although she was never permitted to re-visit her country during her lifetime it was ultimately her final resting place. 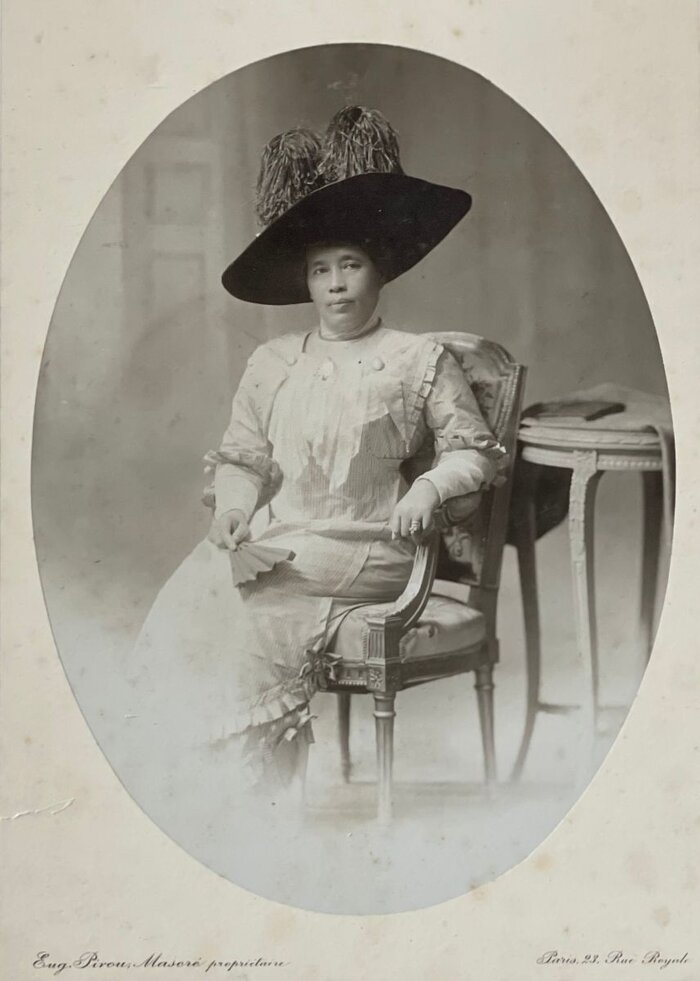 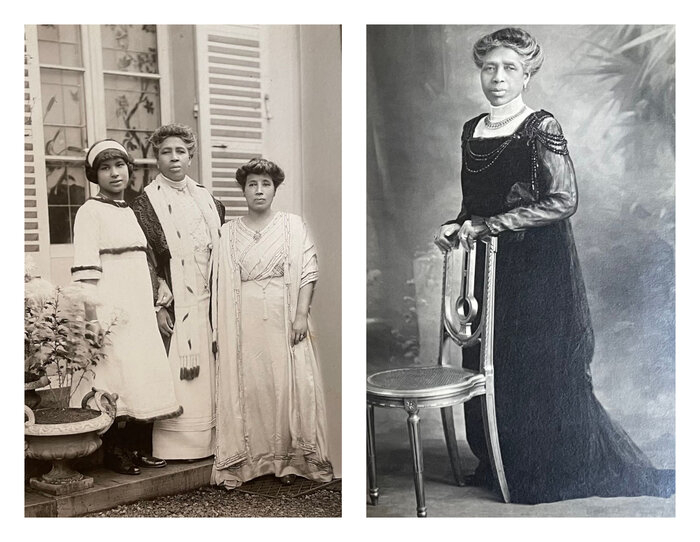 After Ranavalona’s death in 1917, Princess Ramisindrazana was finally given permission to leave Algiers and move to the Alpes Maritimes, France, where she was accompanied by the loyal Miss Herbert.
After Princess Ramisindrazana’s illness and death, 1922-1923, Miss Herbert briefly sought work in Nice working for a wealthy Italian lady (her work contract is included) before returning to Reading and then travelling to China to work as a Methodist missionary. Her time spent with the Madagascan Royal family obviously meant a lot to her as she so carefully preserved the vibrant and ornate evening gown of Princess Ramisindrazana (so different to the sombre black clothes she herself wore), the personal letters, photographs, souvenirs and ephemera down to jottings of the smallest receipts, all meticulously boxed and put away and discovered after her death in the 1930s. Her time with the Madagascan Royal family must have been the adventure of her life! 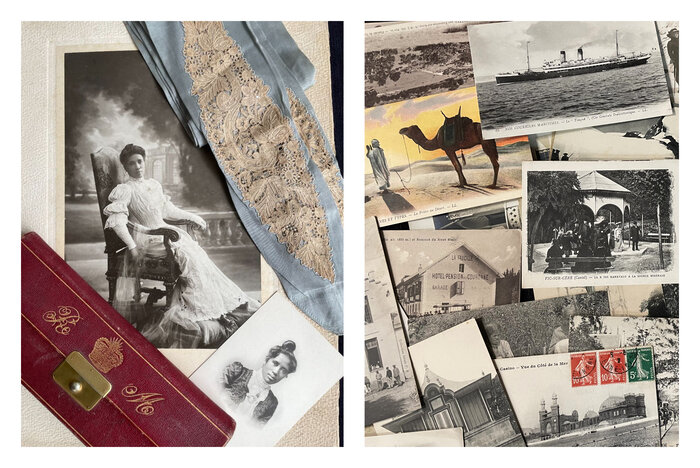 Ranavalona’s heir apparent and pretender to the Madagascan throne – the illegitimate Princess Marie Louise was sent to France to study and married a French agricultural engineer in 1921. Although she continued to receive a small pension from the French government, she chose to pursue a career as a nurse and was awarded the Légion d’Honneur for her service during WWII. She got divorced and enjoyed her new-found freedom to the full, becoming a flamboyant and vivacious socialite. She was buried in Montreuil, France in 1948, without any descendants, finally ending the line of the Queens of Madagascar.

It is incredibly rare to find high fashion of the late 19th century worn by black women, and even rarer to find such a wealth of documents, photographs and ephemera to augment our understanding of them.