As a reaction against the slim, high waisted styles of the early Regency era, 1830’s waistlines began to drop to a more natural level and skirts began to grow wider. A horsehair crinoline or corded linen petticoat was needed to achieve this full skirt look and by the 1840’s, multiple layers of corded linen or horsehair petticoats called crinolines were worn. About 4-6 depending on the fullness required and the weather, were required to acquire a full bell shaped skirt. Small crescent shaped padded bustles were also employed to add fullness to the skirt.

Wearing many layers of petticoats was cumbersome (they wrapped around the wearers legs when walking) and were hot. As the fashion for very large bell shaped skirts continued to grow, the horsehair and corded linen petticoat could not achieve the very large size desired and so by 1855- 1856, the new invention called the Cage Crinolines appeared.

Women hailed the cage crinoline as it was airy and light, thereby freeing the legs. Skirt could grow to enormous widths without the need for hot and cumbersome petticoats. The cage crinoline were worn all the way through to the end of the 1860’s only changing shape to suit the changing fashions.

Most day-wear crinolines were approx. 90”- 120” in circumference, larger sizes were reserved for evening wear or for the very rich who had the space to move around in them.

By the end of the 1860’s, the cage crinoline started to flatten at the front with the emphasize was placed more on the back of the skirt.

It might help if you understand the historical order of the use of the word.
Crinoline was originally a material used to make petticoats in the 1840s to increase the width of the skirt without endless undergarments. It was made of horsehair and linen and didn’t crush easily under its own weight. These were called crinoline petticoats, identifying the material and purpose of the garment. Eventually, they just became referred to as “crinolines.”

With the introduction of the hoop skirt in the mid 1850s, crinolines were displaced by hoop skirts, but the term transferred from one to the other. Any skirt undergarment that created fullness came to be known as a crinoline. Essentially the large crinolines fell from fashion in the 1870s, as did the term, and we heard nothing about crinolines again.

Wedding, and some evening gowns also employed feather-bone stiffened petticoats, or hoop skirts, all of which became known as crinolines, so essentially, the material had nothing to do with the purpose of the garment or the term anymore, and the undergarment alone became known as a “crinoline”.

The nylon netting, or tulle, or any material used to make a crinoline after 1855 is not referred to as crinoline – it is the garment itself that is known by that name. 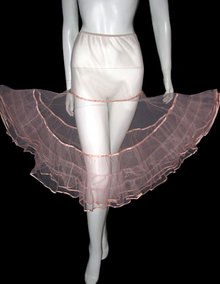 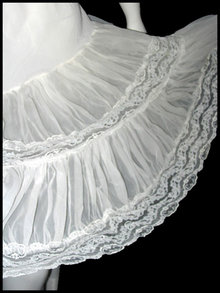 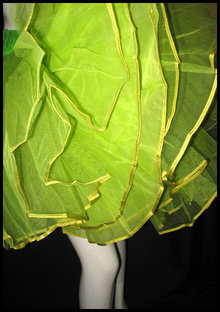 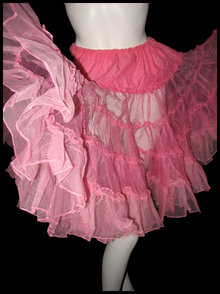 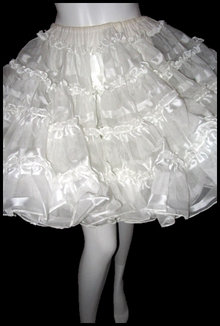 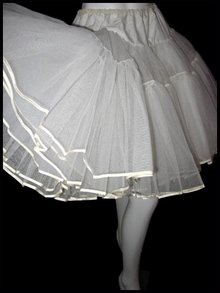 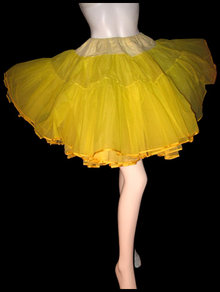 Courtesy of gilo49
← previous next →