The evolution of men’s pajamas has been influenced by world events, science and popular trends.

It was in the late 19th century while Britain was building its Empire that British Colonist discovered the light weight, loose fitting traditional Eastern garment to be perfect for sleeping. But movement of this trend to the United States was slow. The early 20th Century found the nightshirt still standard sleepwear for men with the pajama being seen as a option for young men who favored exotic Asian and military inspired styles.

The opulent 1920s brought with its many changes, a change in attitude toward the pajama. On March 3, 1923 “The Literary Digest” proclaimed;
“The pajama is ascending to glorified heights. Long the black sheep of polite private life, this garment has been elevated… What the well-dressed man will wear when going to bed is one of the burning topics of the immediate future…”

The 1920s saw a thirst for more luxurious fabrics in lively stripes and prints, including art deco designs and jacquard-textured graphics. Braid trim, contrasting piping and frog closure were popular accents. Shirt construction was collar or collarless, and varied from simple front button, to asymmetrical button closure and kimono style. Pants were drawstring or button up with elastic waistbands being introduced at this time. Gentlemen could select cotton, silk or rayon fabrics for summer and heavy weight cotton flannel for winter.

The 1930s and 1940s were a time of world unrest. Pajamas continued to look to Asia and the military for inspiration. News of the Stalin regime were in the headlines and embroidered Romanov escutcheons were making their way into the bedroom. However, the less fashion conscious still had the standard stripe available. Pajama improvements included more durable, lustrous rayon fabrics, improved elastic for waistbands, and inset “balloon seat” panels for sleeping comfort.

1950s brought very little change to pajamas. Two style changes do stand out: the “Yokojama” a half sleeve top with Asian inspired motifs and pants cropped just below the knee, and the “Skijamas” which were knit pullover tops and bottoms with rib knit cuffs. New Nylon and Dacron blend synthetic fabrics were being introduced and prints reflected the popularity of modern art, technology and the Jet Age.

In the 1960s the standard front button pajama with long or short pants was most common along with the knit pullover “skijama” look. The late 1960s saw a brief rise in the popularity in nightshirts (both below and above the knee), perma press fabric and colorful psychedelic prints.

As we move forward into the freer atmosphere of the 1970s and beyond, the popularity of pajamas wanes in favor of sleep shorts, pants, underwear or simply nothing at all for bed wear. 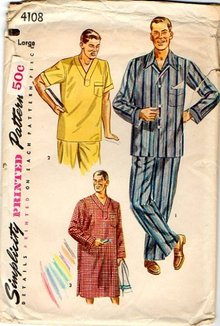 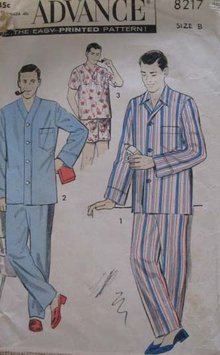 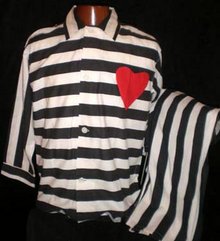 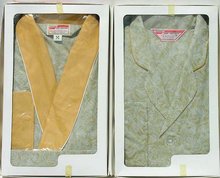 Courtesy of poppys vintage clothing on ruby lane
← previous next →