Early 19th century corsets (or stays as they were known as during this period) were long, soft and had a more natural shape. These long soft corsets reflected the fashion of the era for long flowing, very high waisted dresses made out of diaphanous materials such as fine muslins and silks.

Stays were made of sateen, cotton, silk or linen and contained minimal boning. The support was achieved by quilting and/or cording (although some stays were made plain) and by a long, stiff busk which was inserted into the front slot of the stays. Busks could be made out of ivory, whalebone, kid covered steel or wood and were often given as gifts from lovers or husbands who carved love poems and pictures on them.

Most stays laced up the back and the lacing holes were either hand finished or reinforced with ivory grommets (known as French holes). Metal grommets were invented around 1828.

1800 – 1820 stays tend to have waistlines placed very high, most of the time just under the bust line. The main action of stays from this period was to support and push up the bust (stays always had shoulder straps) while at the same time flattening the stomach and minimizing the hips. This would allow the high waisted dresses of the era to fall straight down from the high empire waist without encountering any lumps and bumps!

Raised bust lines and small hips still remained on corsets from 1820- 1840 but the waistline steadily dropped down to as more normal level as high waisted empire style dresses fell out of fashion and small waists begin to find favour.

This period marks the transition from soft Regency era stays to heavily boned rigid corsetry when tight lacing became popular to achieve a small waist. Starting in the 1840’s, bodices became tighter fitting and skirts, full and bell shaped (supported by multiple petticoats and later, a cage crinoline) which made the waist look small in comparison.

The quilting and trapunto work seen on old fashioned stays did not provide enough support to achieve a small waist so corsets started to include more boning to support the figure. It was not uncommon by the 1860’s for corsets to be boned with as many as 60 whalebones and some corsets of the era had over 100 bones in them! Cording was still used for support as well as cane and later on in the 1860’s, watch spring. Corsets made out of wool, sateen, silks and cottons were also popular.

c. 1840 – 60 homemade linen stays. Front lacing, no boning except for strips of linen to act as support. Would have been worn by a lower class woman. An example of old fashioned stays which were still being worn during the mid 19th century. 25” waist.

Corset making was very specialized work, especially when it came to sewing the boning. Technological advances lead to the invention of the sewing machine, which started to be used in the manufacturing of corsetry during the 1850’s although some corsets from this period until the mid 1860’s are almost always hand sewn.

With the mass production of corsets in factories starting in the late 1860’s, corsets started to be made in standardized waist sizes 18”- 30” (Would fit a approx. modern day Size 6 to a size 20/22). Another major innovation in 19th century corsetry was the introduction of the front fastening busk in 1848. This allowed a woman to put on her corset easily by herself and made dressing quicker. The new busk was gently curved to follow the natural posture and lines of the body for comfort rather than the stiff busk popular in the early part of the century.

Early Victorian (1840’s) corsets often had shoulder straps to support the bust but as the decade progressed, these were dispensed with. A comment made in the early 1860’s though, states that “the old fashioned stays are still too generally worn”! The new hourglass shaped corset was much shorter in comparison to the old long stays. It came up to the mid bust line and pushed and held the bust upwards though the aid of stiff boning. Corsets also had a flared abdomen and hip area to accommodate displaced flesh and fat caused by the compression of the waist.

These 30 years mark when the small waisted hourglass figure and tight lacing was at it’s most extreme. Bodices became so fitted, almost to the point of being skin tight that a perfectly fitting hourglass shaped corsets was needed to create the changing fashionable silhouette. Technology and sewing machines had improved so much by this period that most corsets found from this era are of very high quality despite being factory made and machine sewn.

Late 19th century corsets were commonly made out of cotton coutil, sateen, silk, satin, jean or batiste and were often beautifully decorated with flossing and lace trim around the edges of the corset. Black, white, putty (grey) and drab (beige- brown) were mainstay colours of corsetry but this era also produced the most vibrant array of colours ever seen such as heliotrope, robin’s egg blue, yellow, pink, red and even striped corsets.

Corsets were still boned with whalebone but this was becoming hard to obtain and was very expensive. Cheap, flexible watchspring was often used and whalebone substitutes such as Coraline (made from the fibers of the Mexican Ixtle plant) and Featherboning (made from chicken feathers!) were also used.

Front fastening busks were now the norm and were curved to fit comfortably over the stomach. The spoon busk (shaped and curved like a spoon) was invented in the early 1870’s and stayed in continuous use until the early 1900’s as they were favoured by larger and plus sized women.

While corsets of this period are often heavily boned, on average about 30 bones. In 1868 the steam moulding process was invented and during this process, a corset would be mounted upon a hourglass shaped copper form and then starched and steamed at high temperatures to give the corset a permanent hourglass shape.

As a reaction to this severe hourglass fashion, “health” corsets were introduced in the late 1870’s and 1880’s. Elastic panels were often used in corsets to alleviate some of the rigidity of a completely boned corset. Some corsets even had “ventilation” in them in the form of eyelet holes dotted throughout the corset or by making a corset out of cotton netting for summer use. Some health corsets had additional lacing on the hip/abdomen area for extra support or shoulder straps to support a large bust. These health concerns would eventually lead to the demise of the hourglass corset during the early years of the 20th century.

Corsets went under a major redesign during the beginning of the Edwardian era and the period saw a change in the ideal shape of a woman. Although a small waist remained popular into the early 1900’s, the fashionable silhouette had changed.

The fullness of the bust developed into a full pouter pigeon chest with a small waist and full, rounded hips, this new design in corsets caused the lower back to arch. This curious shape was called the S- bend, as the curves of a lady’s figure resembled the curves of the letter “S”.

Although popular in the Victorian era, the curved busk began to be thought of as unhealthy. It was thought to press down and harm the internal organs, so a perfectly straight busk came into use during the end of the 1890’s. The new straight busk did not to press against the internal organs and gave a more upright posture which opened up the diaphragm, thereby improving respiration.

The new straight fronted corset relied on clever cutting techniques rather than boning, to give the corset a shape it never had before. On these new corsets fabric which was cut on the bias and had diagonal seaming to force the torso to stand upright against the straight busk. There were deep hip gores on the corset to allow for the natural shift backwards of the hips and buttocks due to the upper half of the torso being thrust forward.

By 1905, most corsets had stocking suspenders attached onto them much to the gratitude of women who had relied on garters which often came loose or cut off circulation if tied too tight. Corsets were still be boned with the traditional methods of boning, whalebone was becoming rare and very expensive.

Warner’s introduced “Rust Proof” steels (which were watchspring covered in paper) and the Spirella company introduced the spiral bone which is still used today in corsetry as it is comfortable and flexible.

Edwardian corsets were still made in the traditional corset fabrics such as coutil, jean, sateen and batiste but silk became more popular as corsets started be to be thought more of as lingerie rather than a utilitarian garment. Corsets of this period could be trimmed in ribbons and bows, wide lace edging, decorative flossing.

Shorter corsets made out of strips of ribbon called ribbon corsets and waist cincher corsets became popular amongst thinner women who did not need the support of traditional corset and were also a welcome alternative for wearing during sporting activities.

In 1908, Paul Poiret introduced the “Directoire” style in dress inspired by post French Revolution fashions. Fashion had swung full circle hearkening back to early Regency styles. After 100 years, high waists and long slim figures were fashionable again and corsetry had to adapt to these changes once more.

1910’s corsets still used a straight busk and had a straight front but their function was not to compress the waist to exaggerated proportions but to minimize the abdomen and hips.

A very full bust was still fashionable but the waist, stomach and hip had to more or less measure the same as each other giving the wearer a sometimes top heavy appearance if she had a large bust line!

To achieve this desirable figure, corsets no longer came up to support the breasts (much to the consternation of large busted women) but ended just below the bust line. The actual waist of the corset was placed just above natural level onto the lower ribcage so that extreme waist reduction was impossible. To achieve the long lithe shape, corsets were cut longer and straighter in the body and hip than early Edwardian corsets had been. Some early long line corsets were very long, often ending at mid thigh!

Due to the longer cut of the corset, great amounts of boning were not needed. The boning used had to be long and flat and on average most corsets only had about 12- 20 bones, spaced evenly around the body. Even though corsets of this period were very long, the busk and the boning did not stretch the full length of the corset to allow for ease of movement.

Most 1910’s corsets are made out of coutil, white being very popular but spotted broche, damasks (both in cotton coutil and silk) were popular and would remain so into the 1920’s. The famous corset color, Tea Rose pink, was introduced in the 1910’s as well. Trimming tends to be minimal on corsets from this time period, most only having lace trim around the top and flossing on the bone casings, being minimal or non existent.

After World War One, the long line corset began grow shorter and a lighter boned model of corset would start to replace it during the end of the 1910’s and into the 1920’s. This new style of corset ended just above waist level and although it still came low down onto the hips. With the many women enduring the hardships of the First World War and later on entering the workforce, traditional heavily boned corsetry would no longer be appropriate for the changing role of woman. 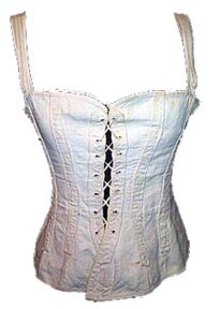 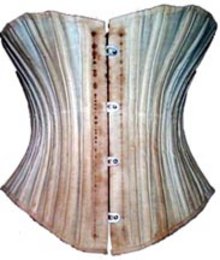 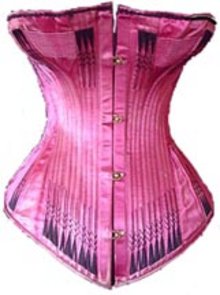 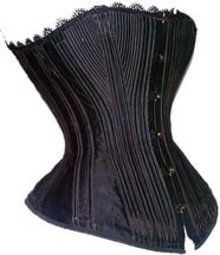 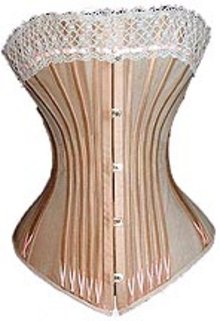 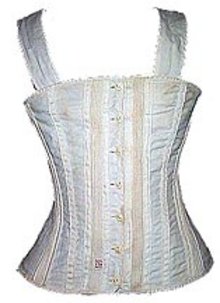 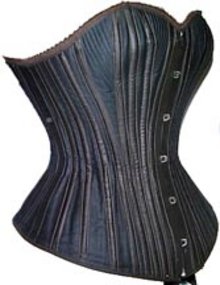 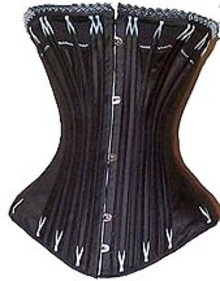 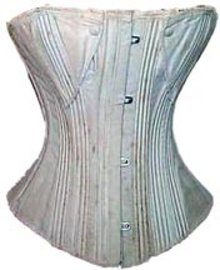 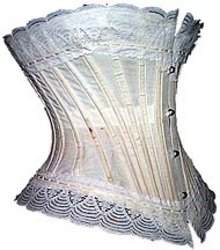 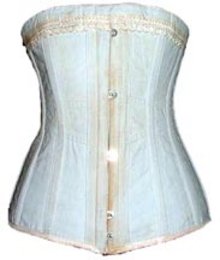 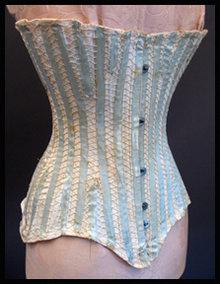 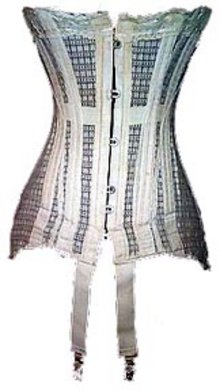 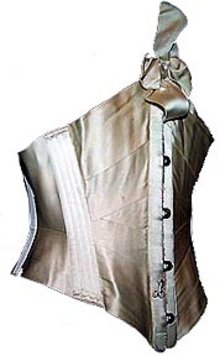 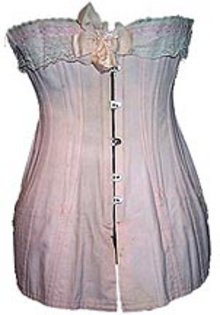 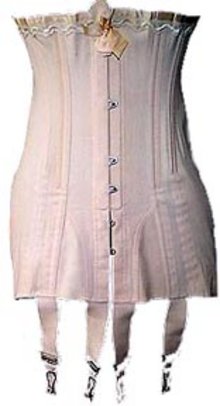 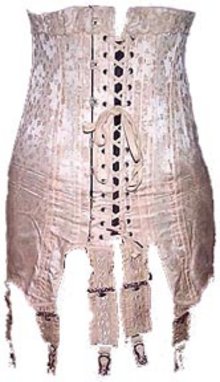 Courtesy of corsetsandcrinolines.com
← previous next →