(b.1937) Yuki was the label of Gnyuki Torimaru. Born in Japan, he studied architecture before working as a textile engineer. He made England his base in the 1960s and studied at the London College of Fashion, graduating in 1966. He first worked at Louis Feraud, then for Norman Hartnell and Pierre Cardin.

He launched his own collection in 1972, and made his name in draped jersey dresses inspired by monastic styles. His trademark cut was panels cut in a full circle and then draped, giving maximum fullness without seams.

He also teamed up with the manufacturer Rembrandt in the mid-1970s to produce a more affordable range of dresses, whilst maintaining the quality and design ethos of his couture work.

He created garments for Princess Diana’s 1986 visit to Japan, and began using a new pleated fabric and technique, which inspired even more fantastic and luxurious garments. He still designs in London, under the name Gnyuki Torimaru. 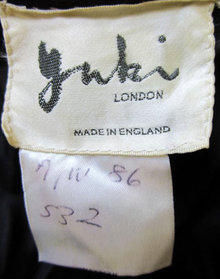 from a 1986 Yuki Couture evening top

Courtesy of Solveiga
← previous next →