John Bates started the Jean Varon label in 1960 and is possibly one of the greatest forgotten talents of the 1960s and 1970s. With no formal training, he took an apprenticeship at London couturier Herbert Sidon in the late 1950s. “I called it Jean Varon because at the time an English name like John Bates meant nothing; you had to appear to be French. Jean is French for John and Varon because there was no ‘V’ in the rag trade book. Jean Varon made a good graphic image’”(John Bates quoted in ‘Boutique’ by Marnie Fogg). As far as is known, all Jean Varon labeled garments were designed by Bates. Early garments are innovative with space-age fabrics, see-through panels, cut-out holes and matching accessories right down to the tights. As an aside, Bates is also sometimes credited with the ‘invention’ of the mini-skirt. He popularized trousers for women and encouraged the first ‘underwear as outerwear’ style, through precision cutting and the use of lace and mesh. An example of this work won him the ‘Dress of The Year’ title in 1965.

His reputation earned him the ultimate commission — designing a wardrobe of outfits for the second half of the first Emma Peel season on The Avengers in 1965-66. The contrast from Bates’ first appearance as designer is breathtaking; his bold op-art motifs, mini-skirts, trousers and feminine evening-wear injected glamour and youth into the character. Contrary to popular belief, Bates was only on board for half a season and took no further part in The Avengers. It is a connection that he continues to be most famous for. His designs were also manufactured for sale across the country, the first time that a woman could watch a TV character one evening and own the clothes by the next.

In the later 1960s and 1970s Bates continued to innovate but the garments moved towards a softer, feminine look. Bates concurrently designed for an own-name label, which was more avant garde and innovative. He was still designing for Varon throughout the 1970s, but at some point in the late 1970s/early 1980s his own label fizzled out into bankruptcy and he decided to leave the mainstream fashion business. He is now working as an artist and living in Wales. The Varon label carried on into the 1980s, with designer Tom Bowker. There are still a few gems to be found from this era, but it is the Bates work that is collectible. 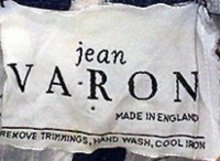 from a ca. 1973 dress, woven rather than printed 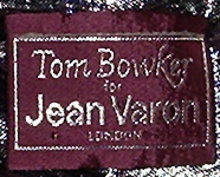