The Utility Label or CC41, was used in Great Britain as a result of wartime shortages in WWII and the period immediately following. Rationing of clothing went into effect in June, 1941, and strict manufacturing standards were drawn up limiting the amount of fabric, fasteners and trims that could be used in each garment. This ruling was called Civilian Clothing 1941, or CC41.

The British Board of Trade enlisted the help of many of the country’s top designers, including Hardy Amies, Molyneux and Norman Hartnell to design samples that fit within the strict measures. These styles were then adapted for the mass market.

CC41 labeling continued until 1952, when rationing was finally ended. 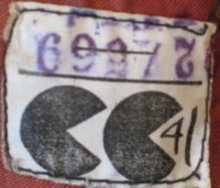 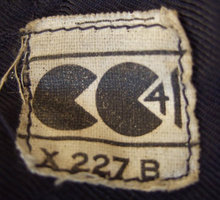 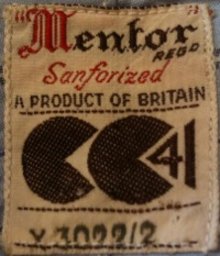 from a 1940s cotton mens shirt