Triumph International today is a multi-national company producing underwear and swimwear. In 1886, the tradesman Michael Braun and the corset-maker Johann Gottfried Spiesshofer founded their corsetry factory in Heubach, Württemberg (Germany). They started out in a shed and had six employees and six sewing machines.

In 1902, the trademark Triumph was registered – in search of a good company name and inspired by the “Arc de Triomphe” in Paris, they called the company Triumph. The 1920s saw the introduction of the first versions of a bra, and the 1930s brought the corselette, strapless corset, front-fastening bra and changeable straps. By this decade, Triumph was Europe’s biggest corsetry manufacturer, and in 1933 they opened their first foreign subsidiary in Zurzach, Switzerland, where the company’s corporate headquarters are located today.

After WWII, production restarted in 1948. The trademark was extended to Triumph International in 1953, and in the following years the company expanded to other countries in Europe. In 1956, a long-lasting collaboration with the German couturier Karl-Heinz Oestergaard was started. In the 1960s, Triumph expanded to Asia: first to Hong Kong, and in the following decades to further Asian countries. The products sold in Asia were specifically made to fit Asian women.

In 1962, Triumph produced it’s first swimwear line. Lycra first came up in 1959, and in 1966, Triumph launched the “Doreen” line, made of polyamide and elasthane. One year later, the first molded cups were produced.

1972 saw the expansion to Brazil, Australia and South Africa. At the end of the 1970s, the brand “sloggi” was launched – their trademark is soft, natural, cotton underwear. The French men’s underwear company “HOM” was taken over in 1986, and in 1990 the French high-quality lingerie company “Valisère” followed. “BeeDees” (aimed at younger women) and “triaction” (sports underwear) are also brands of the Triumph group. 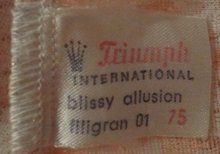 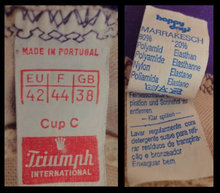