Pauline Trigère (1908/9 – 2002) was born in Paris and immigrated to the US in 1937. By 1942 she was designing under the name “Trigère”, having spent the previous years working for Ben Gershal, Travis Banton and Hattie Carnegie.

Trigère was a master cutter; she worked directly on a live model. Her garments were known for sophisticated and structured tailoring, and the best of these were her coats and dresses made from fine wools. She even made evening dresses from wool – in designs that were elegant, never frilly or fussy.

To see Trigère’s work in action, watch the movie, Breakfast at Tiffany’s. Trigère dresses the character played by Patricia Neal. The clothes are the embodiment of dramatic sophistication.

Over her long career, which spanned from the 1940s to the 2000s, Trigère’s business remained relatively small, with Trigère herself doing the designing and running the business with the help of her brother and son. She designed scarves, jewelry and furs in addition to her clothing line. She also did a lower cost line of coats “A Trigère Coat” for manufacturer Abe Schrader. Pauline Trigère remained active until her death in 2002.

The seven “paulinetrigère” script labels pictured were used from the 1950s through the 1980s. Please look carefully and note there are small differences in them. In the 1980s label, the “i“s have short dashes above them instead of dots. The “p” is not as large as in the older labels, and some letters are slightly thicker.

from a 1947 dress, possibly owned by Trigère 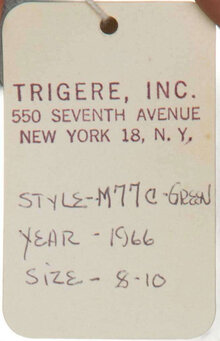 hangtag from a 1966 cocktail dress

from a 1970s tuxedo jacket and vest

from a 1980s dress claireshaeffer

VFG would appreciate any info on this label

Courtesy of contentmentfarm.com
← previous next →