Ellen Tracy was started in 1949 when Herbert Gallen bought Tranel underwear. He transposed the letters in TRanEL to form ELlen TRacy. The company was mainly a lady’s blouse-maker.

In 1962, recent Kent State School of Art graduate Linda Allard was hired by Gallen, and for her first two years with the company, she cut out shirts.

In 1964 Allard was made chief designer. She soon branched out into other sportswear and separates. In 1984, Allard’s name was added to the label. The line has been known for its understated feminine designs. In 2004 Kent State did a retrospective of Linda Allard’s career. She retired in 2005, with George Sharp taking over as designer. 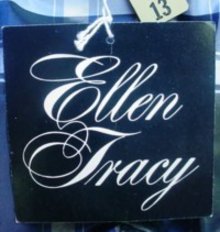