Bill Tice designed for several ready-to-wear firms in New York before becoming the head designer for Royal Robes in 1968. He moved to Swirl from 1975-1984. Tice is well known for his lounge-wear designs and is credited for originating such at-home fashions as closely pleated caftans, jersey floats, and the quilted gypsy look. He received a Coty Award for lingerie in 1974. 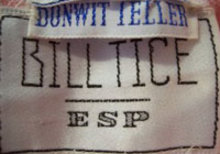 Courtesy of thevintagepeddler.com
← previous next →