Ann Taylor was not a person, but was the name of a dress. It was the best seller in the store that belonged to the founder’s father. When the son started his own store in 1954, it was given the name “Ann Taylor” by his father. The first Ann Taylor store was in New Haven, Connecticut.

During the 1990s and into the 2000s, the Ann Taylor chain has shown tremendous growth. Today there are more than 800 Ann Taylor and Ann Taylor Loft stores.

Label note from former Ann Taylor employee, Julie Kinzey: “When I worked there in the late 1990s there were blue labels as well and they indicated a higher standard of quality, usually better construction and materials. You’d find this level of quality at “blue label stores” like on 5th Avenue in NYC, and the majority of all other regular stores were the white labels. The 3rd tier was the LOFT or outlet stores.” 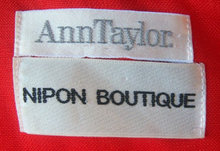