Swirl was established in Philadelphia by the L. Nachman and Son Company, which was located at 10th and Berks Streets. This company had produced clothing since the early days of the 20th century. In the early 1940s they began making a garment called the Neat ‘n Tidy, and in 1944 the Swirl dress and label were born. Actually, the Swirl was originally conceived as an apron. When Lawrence Nachman registered the Swirl name with the US Patent and Trade mark office, the product was listed as “WOMEN’S AND GIRLS’ WRAP-AROUND APRONS”. The wrap around apron was a common garment of the day.

By 1953, Jack Nachman, president of the company, was looking to relocate the Swirl operation. So Mr. Nachman went south, to Greenville, South Carolina. Through business contacts there he settled on the little town of Easley, about 15 miles from Greenville. The location was ideal. The town was in the middle of the cotton belt – the area where cotton was grown and then made into cloth. The textile industry was booming. In fact, there were 67 factories producing cotton fabric in the Easley-Greenville area – factories eager to supply their product to a new clothing production plant.

The Nachman Company started construction on the Easley Textile Company (as the new subsidiary was known) in October, 1953, and in January 1954 the new plant opened. The plant was state of the art, with all new machines from Singer.

The Swirl dress was a quick and easy wrap for the busy homemaker. The basic design was always the same: a wrap-around that tied and fastened with a one-button closure. The dresses were made in hundreds of variations using printed cotton fabrics with embroidery, appliqué, and colorful trims such as rick-rack.

As lifestyles changed, so did Swirl. In the 1960s Swirl began making women’s loungewear and developed different lines for a more diverse consumer base. In 1964 they developed a trendier line – Park East, and in 1965, a line for teens – Swirl Girl – was launched. In 1975, Bill Tice was hired as designer at Swirl. He remained there until 1984. Betsy Bloomingdale did a line of dresses and loungewear for Swirl beginning in 1977.

By the 1970s, American was becoming more and more designer-crazed, so Swirl hired Geoffrey Beene to create designs for them in 1978, and Oscar de la Renta in the 1980s.

By the end of the 1980s, the main product at Swirl was the Models Coat. In 1990, the first real signs of trouble for the company came when sewers were laid off and production curtailed. The reason for the first cut-back was given that they could not keep the workers busy, due to a lack of fabrics. By this time, many of the textile makers were pulling out and moving to Mexico or Asia where labor was cheaper. The decline of the company occurred slowly through the 90s, and in 1998, Swirl announced that it would be closing its main facility. The remaining jobs were phased out, and the company closed the Easley factory for good in 1999.

They did continue operations in Ware Place, SC, making the Models Coat. As of 2020, Swirl is still manufacturing products made in the USA bearing both the Swirl and Models Coat brands. 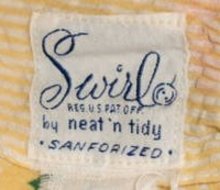 Courtesy of Vintage-Voyager. Be aware that this label has also been seen in 1960s dresses. 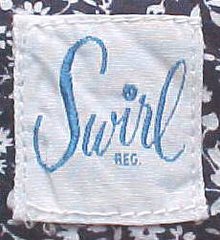 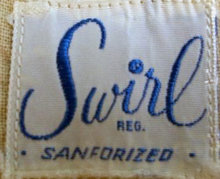 from a 1960s Swirl Models Coat 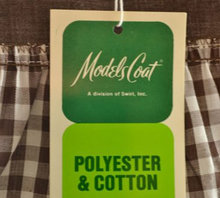 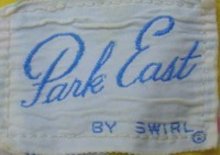 from a 1970s flower power dress 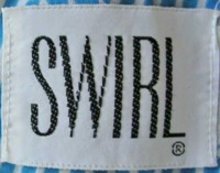 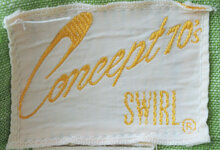 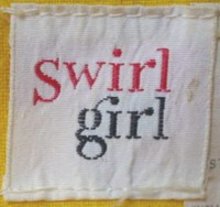 from a 1970s junior line dress

from a 1980s Concepts dress