St. John In order to stretch her own limited wardrobe budget, Marie St. John made her first pure wool knit dress on a flatbed knitting machine in 1962. Her then-fiancé and salesman Bob Gray pitched her designs to department stores and got an order for 84 dresses on his first try. St. John Knits took off quickly, appealing mostly to a clientele of mature career women who preferred a classic look.

Later, Marie Gray wanted to use a new yarn blending wool and rayon and despite the mill’s warning that the blend wouldn’t take colour well she created a successful blend that was resilient and didn’t wrinkle. Her blend was called ‘Santana’ yarn and soon her garments were made of the new blend, eventually accounting for 75% of all sales under the St. John label.

In 1989 the couple sold 80% of the company to the Munich-based luxury apparel company Escada who took the company public in 1993. The following year St. John introduced its Griffith & Gray line (designed by the Grays’ daughter, Kelly, and Diane Griffith) to attract younger shoppers. Kelly became company president in 1996 and the following year St John began marketing its clothing in Japan. The company discontinued its less-expensive SJK line for younger women in 1998, just one year after its launch and a brief flirtation with home furnishings in the mid 1990s ended in 1998.

In 1999 St. John reorganized with a buyback by the Gray family and Vestar Capital Partners, leaving only about 7% of the stock in the hands of former shareholders. Management problems continued to plague St. John into the 2000s. The company went through four CEOs in as many years finally hiring Richard Cohen, former chief executive of the North American branch of the Italian menswear company Zegna.

In 2005, after many years as the company’s signature model, Kelly Gray was replaced by Angelina Jolie. In 2010, model Karen Elson became the face of St. John.

from an early 1970s sweater dress

from a 1980s santana knit dress 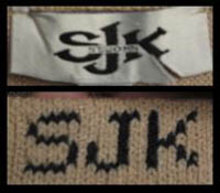 Courtesy of Claire Shaeffer
← previous next →