Sears, Roebuck & Company was at one time the largest retailer in the United States, and was both a mail-order company and chain of stores that sold mid-priced goods.

The company was founded by Richard W. Sears, a railroad station agent located in Minnesota, and Alvah C. Roebuck, a watchmaker. They began by selling watches and jewelry by mail order in the late 1880s. In 1893, they incorporated as Sears, Roebuck & Company. The company was located in Chicago, which would remain the site of their headquarters through the years.

By 1894, the Sears, Roebuck catalog was filled with many goods that were needed and desired by the many farm families who had little access to stores. The good prices and wide selection caused the business to grow very quickly, and within a few years the catalog offered everything from farm equipment to toys.

In 1925, Sears, Roebuck & Company opened their first store in Chicago. Within the next few years, Sears, Roebuck stores were scattered across the Mid-west, and were being built across the country. By 1933, there were 400 stores nationwide.

During this time period, Sears began to develop their own brands, such as Kenmore appliances. Over the years, Sears clothing lines have included Kerrybrooke, Charmode, Roebucks, King’s Road, and The Fashion Place labels. There are hundreds of different Sears labels, and the best indicator for dating is often the styling of the garment, rather than the style of the label.

The name of the stores was shortened to just Sears in the early 1970s, though the official name of the company remained Sears, Roebuck and Company until the 1980s. In 1993 an era ended when Sears stopped producing their catalogues.

In 2005, Sears was merged into the K-Mart Corporation. 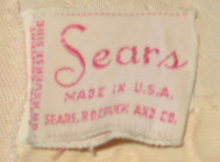 from a 1950s blouse. Kerrybrooke was a Sears line 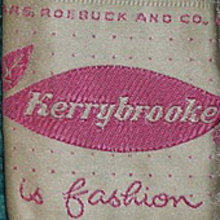 from a 1950s coat. Kerrybrooke was a Sears line. 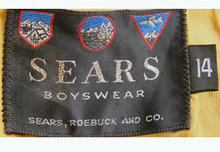 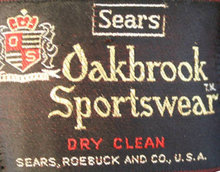 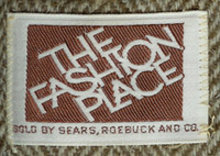