Arnold Scaasi (1931-2015) was born Arnold Isaacs in Montreal, Canada. He left school at fourteen in order to travel to Australia to visit an aunt, and upon his return to Montreal he attended the Cotnoir-Capponi Design School. For his last year of school he went to Paris and studied at the Chambre Syndicale de la Couture Parisienne. In 1953 he left Paris for New York. Upon arrival in the city he called Charles James, who ended up offering him a job.

He worked with James for a while, absorbing James’ approach of designing in the round. Isaacs also freelanced and made clothing for private clients. He also did made-to-order work for companies to use in advertising, and it was for one of these ads, Body by Fisher, that he reversed his last name and became Scaasi for the first time.

In 1956 Scaasi did his first ready-to-wear collection, which was a success. In the next few years he did menswear and costume jewelry, but in 1964 he scaled back on these operations to concentrate on his new made-to-order salon. He made extravagant clothing for many of the country’s most famous women, including First Ladies, actresses and socialites.

The Scaasi Boutique label was started in 1984. This line was top quality ready-to-wear, and was beautifully made and quite expensive. The Arnold Scaasi Nightlife line of ready-to-wear cocktail dresses was introduced in 1996. They originally retailed for $350.00 – $600.00

“I am not a minimalist designer! Clothes with some adornment are more interesting to look at and more fun to wear.” Scaasi 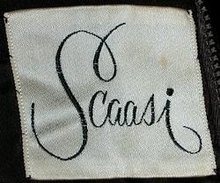 Courtesy of bigchief173
← previous next →