Gloria Sachs (1927 – 2012) began designing textiles in the late 1940s for the home furnishing firms of Knoll and Herman Miller. During the 1950s she worked in the fashion department of Bloomingdales. By the late 1950s she was designing clothes for girls under the label Gloria Sachs Red Barn. Throughout the 60s she designed preteen clothing, working at Bloomingdales, and then at Saks Fifth Avenue. In 1970 she started her own label which specialized in high-end sportswear and separates. Sachs had trained as a textile designer, and many of the fabrics she used were of her own design. She took standard designs, such as tartans and paisleys, and worked with new color combinations to achieve an updated look. She also was known for her cashmere sweaters. Gloria Sachs Designs closed in the early 1990s. 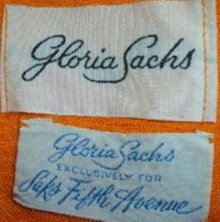