Then and Now: Downtown fashion district

Russell Walker was a salesman who spent much of his career selling women’s apparel. He was born in Seattle in 1902 and came to Spokane in 1916. As a teen, he began working in the back at Bartlett’s, a womenswear store, but soon was promoted to sales when management saw how he persuaded his female classmates to shop there. He opened his first store in 1920, selling World War I surplus gear, then switched to ladies’ shoes in 1930. He called the store Savon’s, adding women’s sportswear a few years later. Walker’s business partner, Max Rogel, said the name was intended to be Save-On Shoes, but a mistake by the sign painter was kept because they couldn’t afford another in the Great Depression. Walker sold Savon’s to Rogel in 1940 and opened a women’s boutique called Rusan’s, combining his own name and that of his wife, Ann. Ann was in charge of sales, and Russ kept the books. Located in the Sherwood Building, it carried suits, coats, and dinner and formal wear. The store clothed the models at elegant fashion shows that were featured on the newspaper’s society page. A private entrance added in the rear of the building welcomed customers to one-on-one showings of designer originals from Paris in a comfortable lounge. The Walkers retired in 1969 and Rusan’s 11 stores, including at NorthTown, Shadle Center and Dishman, were bought by the C.F. Berg Co. of Portland. Savon’s also grew, with stores at NorthTown and U-City malls, the last one closing in 1996. Walker died in 1984. Ann had passed away in 1978. Rogel died in 1992. 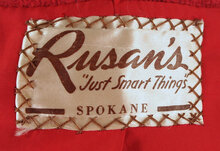 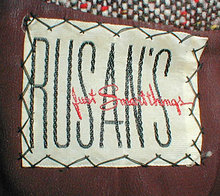 from a brown tweed jacket