Started in 1848 by Eugene Rodier as primarily a textile mill company. They found fame producing their own modern version of the Kashmir shawl for sale locally and abroad. Rodier were keen to develop new textiles, producing senellic – an early spun rayon – and Kasha, a fabric they copyrighted.

Rodier made the knitted jersey found and utilised by Coco Chanel to much acclaim, which saved the company in 1916. During the 1920s and 1930s Rodier produced many different fabrics for Jean Patou and the Rodier family partially financed Patou’s expansion during the 1920s. Around this time Rodier also produced interior fabrics designed by people such as Pablo Picasso.

Rodier began selling ready to wear in 1956 with a fine knitwear collection and followed later with other clothing such as coats and accessories. Over the years these were sold exclusively by the brand in a dozen boutiques worldwide until 1995 when Rodier became available in select high end shops and department stores in America. 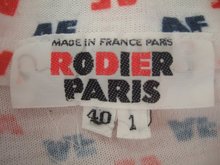 from a 1967 Air France uniform dress