The label “Shannon Rodgers for Jerry Silverman” was established in 1959. Rodgers previously designed for the movies and later worked with Silverman at Martini, a dress company that did adaptations of Paris designs. Rodgers and Silverman continued this practice in their designs and were known for their Americanized versions of Balenciaga designs. Rodgers was the design half of the team, leaving the business end to his partner.

Rodgers designed simple, but elegant, dresses, often with a single decoration to add interest. The business closed around 1978. In 1983, they donated their $5 million clothing and arts collection to Kent State University, where it formed the basis of Kent State’s museum collection of historical fashion. Rodgers died in 1996. 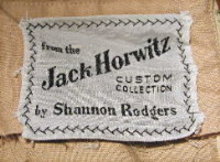 from a late 1960s cocktail dress