Caroline Reboux was a Parisian milliner. From early in her career, when she made hats for the Empress Eugenie, until later years, when she had a special relationship with Vionnet, she excelled at simplicity and structure. In 1870, her establishment was situated at 23 Rue de la Paix, opening a second location at 9 Avenue Matignon in the 1920s, which served as the company’s base until closure in the 1950s. Ms. Reboux was particularly influential in the 1910s and 1920s, and even designed clothing and other accessories, mainly in the Edwardian era. 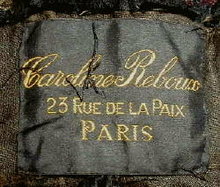