Priscilla Eastman Comins was born in Quincy, Massachusetts in 1916 and eventually became internationally famous for her bridal gown designs. Upon her graduation from the New England School of Design in Boston, Ms. Kidder worked as a buyer in the bridal section of R.H. White’s department store in Boston. By the mid-1940s she started creating gowns of her own inspired designs and in 1945 she left White’s and became an independent dressmaker and wedding consultant. She founded the renowned Priscilla of Boston firm, where she was celebrated for the gowns she designed for the weddings of Grace Kelly, Luci and Lynda Johnson, Julie and Tricia Nixon, Barbara Eisenhower (granddaughter of former president Eisenhower), and countless other socialites and celebrities.

In 1940 Priscilla Eastman Comins married James Norton Kidder, who later worked as vice president and treasurer in his wife’s business. A couple of years later she opened The Bride’s Shop on Newbury Street in Boston. Priscilla Kidder’s creative designs, often embellished with beautiful imported laces, and the post-WWII wedding boom were a match made in heaven and in the first week her shop was opened, she grossed somewhere between $10,000 and $15,000.

In 1958 ads began to appear for “new romantic dresses with the ‘Miss Priscilla’ label and ‘Miss Priscilla’ new day clothes at The Bride’s Shop. The Miss Priscilla dresses were advertised as “casuals for young figures, available at The Bride’s Shop on Newbury Street” in Boston. They were also advertised as “cottons for autumn wear,” as romantic dresses for the “prom age buyer,” for young women with young figures and who “don’t feel like paying astronomical prices for gay and sporty wools for the football game,” “for a Cotillion gown,” etc. One reference to the Miss Priscilla dresses noted: “The same expert attention is given to career girl or deb., known or unknown matron, whether she buys a ‘Miss Priscilla’ $17 cotton or a ‘Priscilla of Boston’ bridal gown at $100 or $1,000” and “If her figure is young the Mother of the Bride will look as well as her daughter in these cottons by Miss Priscilla.”

After 1958 there were far fewer ads for the Miss Priscilla label, which apparently did not draw as many buyers to The Bride’s Shop as the Priscilla of Boston bridal gowns did, but references to the label could be found sprinkled lightly through the first half of the 1960s. By the early 1970s Priscilla of Boston was one of the largest upscale dress manufacturers in the country as Priscilla Kidder propelled it to that status by her talent, determination, and perseverance.

Over the years Priscilla of Boston had numerous bridal lines, in addition to the custom work that the company continued to do. In addition to the “Priscilla” line, the company started the “Betsy” line, named for Priscilla Kidder’s daughter, which was created in 1960 for the woman who wanted an inexpensive dress. The “Teeny” line, later renamed the “Petite” line, was a more sophisticated title, created for the small woman. The most recent line created, in 1980, was the “Contemporary Romantic” line, a less formal gown for the refined woman. Priscilla of Boston also designed dresses for bridesmaids, mothers of brides, and debutantes. Several of Priscilla Kidder’s dresses are in the Division of Costume Exhibit of the Smithsonian Institute’s Museum of American History.

In 1993, Priscilla Kidder sold her company, retired shortly afterwards, and died in December 2003. Federated Department Stores bought Priscilla in 2002, then sold it to David’s Bridal in 2007 which ultimately closed the Priscilla of Boston stores at the end of 2011. 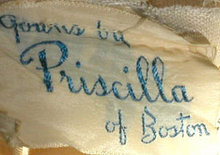