Pringle of Scotland, a yarn-spinning and undergarment-weaving business, was founded in 1815 by Robert Pringle. It was originally called Waldie, Pringle, Wilson and Co. and was located in Hawick, Scotland, a centre for woollens manufacture since the late eighteenth century.

In the 1870s a Yorkshire mill-worker named Joseph Dawson invented an efficient new mechanical process for separating the softest cashmere from its harsher guard-hairs, inspired by an overland journey through India. The process revolutionized the production of fine cashmere clothing. The company founded by Dawson later became a conglomerate which acquired Pringle and another old Hawick company, Ballantyne.

Throughout the 19th century, Pringle manufactured undergarments (vests and stockings), but in the Edwardian period they ventured into outerwear production with coats for men and women. ‘Robert Pringle and Sons’ became a limited company in 1922. In 1934 the company hired Otto Weisz as head designer. Weisz’s innovative twinset for women decisively transformed soft woolens from underwear to comfortable and daringly figure-enhancing outerwear.

This switch of production sparked over 30 years of successful selling of men’s and women’s luxury knitwear, with garments being modeled by high-profile, fashionable movie stars, from Margaret Lockwood to Lauren Bacall. Pringle garments, and cashmere in particular, were highly sought after and available from exclusive outlets. In the years following the second world war, Pringle joined the effort to restore Britain’s economy through an export drive. This led to a great boost in the number of lines manufactured especially for high end U.S. stores, associations which lasted through the 1950s and 1960s.

During the 1980s Pringle increasingly lost its way both style-wise and financially, becoming unfashionable, associated mainly with sportswear and falling victim to the rise of cheap imports. In 1999, after 10 years of worsening business, Dawson International sold off Pringle, seeing it as a less-desirable global brand to its sister company, Ballantyne. By this point, the firm was reduced to producing largely run-of-the mill sports knits, rather than the cashmere and patented Argyle patterns of their glory days.

The brand and its remaining factories in Hawick and Galashiels, were bought by Hong Kong businessman Kenneth Fang, who placed Kim Winser (formerly of Marks & Spencers) in charge as CEO. Mirroring the successful rebranding strategy of Burberrys, they repositioned Pringle as an exclusive designer-driven, vintage-tinged line available only from glossy boutiques and luxury department stores. An aggressive marketing campaign was backed up by head designer Stuart Stockdale’s new collections – some lines of which were sourced from selected archive designs which had been stored at the Hawick factory. Pringle’s first salon show was presented at London Fashion Week in 2004. Stars are once again photographed wearing Pringle.

James Pringle of Inverness is a separate brand, specialising in more traditional kilts and knits.

from a 1950s bracelet sleeve sweater

from a 1950s turtleneck sweater

from a 1950s intarsia design sweater 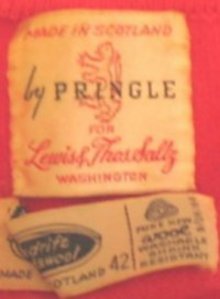 from a 1960s lambswool sweater

from a 1960s lambswool knit suit

from a 1970s lambswool argyle sweater

Courtesy of vintage-voyager.com
← previous next →