Plain Jane Dress Company began in the mid-1960s (‘68-‘69) as an amateur enterprise by friends Susie Tompkins and Jane Tise, and met with success right out the gate. Aimed at their peers and with little competition, the mini-dresses designed by Tise and peddled by Tompkins to local shops, filled a growing need for trendy garments reflecting a youthful and free-spirited California style.

With no business plan or experience, using borrowed money for gas, these unlikely yet energetic, hippie-entrepreneurs managed to get samples made, sold, produced, and shipped, on their way to building a highly successful brand. Susie’s husband Doug Tompkins jumped in to help, creating a relationship with the Chinese American Sewing Company to produce samples and dresses, and infusing the fledgling company with cash after selling his successful The North Face mountain-climbing gear company. Doug also hired Alan Schwartz, offering him a partnership in the company. Schwartz is credited with helping the company’s ascension outside the local market, especially at the beginning, when he handled all the sales and merchandising and created a showroom in NY to sell to the big chain stores.  By 1968, they were making dresses in lots of 100, enabling them to fill a $15,000 order from Joseph Magnin.

Plain Jane soon grew to have multiple product lines, including the popular Sweet Baby Jane label of retro-inspired separates. Rose Hips was another early line. In 1970 the company posted sales of nearly $2 million a year.   Around 1976, Doug’s focus on international expansion led Plain Jane to sever relations with the Chinese American Sewing Company, in order to manufacture in Hong Kong. This led to labor protests in front of the company’s San Francisco headquarters.

Doug began to force his sharply differing vision for the company’s growth and direction on the others forcing a coup, and effectively side-lining the others in decision-making. As he assumed control, he steered the company in a less bohemian, more contemporary direction. Disliking the name Plain Jane, he changed it to Esprit de Corp – a thoroughly ironic choice, given the acrimony that existed between the partners. This name change, suggested by a friend of Doug’s, and reinforced by graphic designer John Casado’s branding, consolidated the 6 different product lines under one banner. 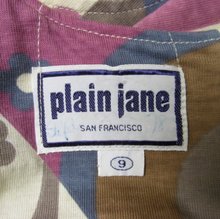 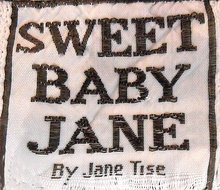 Courtesy of ranchqueenvintage
← previous next →