William Pearson began his career in fashion in 1951 when he studied under Norman Norell. He began his own label sometime in the late 1950s. His couture business was based in Los Angeles. About 1967, Pearson moved to Paris where he let the city inspire him. He traveled back to Los Angeles twice a year to present his collections. A self described classicist, Pearson favored conservative looks that flattered his customers. 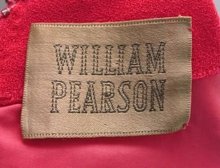 Courtesy of Coutureallure.com
← previous next →