Pappagallo was a women’s boutique in Beverly Hills, California founded by designer and businessman Donald Pliner in 1967, when he was just 23 years old. Catering to a trendy clientele, it generated $1 million in sales during its first year of operation. Pliner went on to have enormous success with his stores The Right Bank Clothing Company and later, the Right Bank Shoe Store, prior to launching his own popular namesake shoe brand. 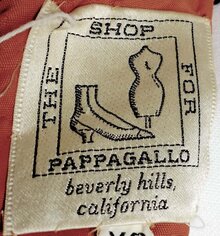 Courtesy of Kittenteeth Vintage
← previous next →