The underwear company Palmers is Austria’s biggest textile company. In 1914, Ludwig Palmers opened his first shop in Innsbruck, Austria. It was called “Zum Restenkönig” and sold aprons, fabric remains and small articles of women’s clothing. After the First World War, Ludwig started to specialise in what would become the trademark of Palmers: stockings and women’s underwear. In the 1920s, his three sons entered the business, and the “Palmers” company was founded. By 1927, they already had eight shops across Austria. A year later, they opened their first shop in Vienna, in the prestigious Rotenturmstrasse.

The classic green Palmers logo with the crown on top was created in the 1930s and has seen few changes (since the 60s it was also shown in reverse – white writing in a green box). In the same decade the company also started a franchise system, which allowed them to open even more shops across the country.

The 1940s and WWII brought destruction, austerity and supplies were not available anymore. 1942 Palmers launched “Strumpfmagie” (stocking magic) – liquid brown make-up for the legs to imitate stockings. The company prospered again in the 1950s and created a scandal with an ad that showed a woman’s legs up to mid-thigh. It was ordered that they must be covered with an extra skirt that was glued onto the posters!

The 1960s brought innovations like lycra fabrics and panty hose. In reaction to the feminist movement at the end of the decade, Palmers introduced the seamless “No-Bra” bra. In 1979, Rudolf Humer took the company’s lead over from Walter Palmers. The 80s started with new ad campaigns that showed women as sexy and self-assured, and well-built men. So far, the focus of publicity for men’s underwear had been on comfort. In the 80s and also the 90s, the company expanded further, also with shops outside Austria. Well-known ads were shot by star photographers with top models like Cindy Crawford.

A new line called P2 was launched in 1999: P2 Cosmetics are sold at select Palmers stores in Austria, whilst P2 underwear, accessories, basics and swimwear are sold at BIPA, a chain of Austrian drugstores (also sold at dm Drogeriemarkt drugstores in Germany). 2004 saw the sale of Palmers to two investment companies, 2005 a re-vamping of shops, logo and image, and in 2008, the French underwear company Lejaby was bought, which brought financial troubles, as the company needed to be re-structured. In 2011, plans were announced to sell Palmers, and that Lejaby might be closed. So far, no buyers have been found and the company
continues. 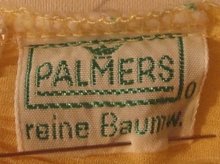 from a 1970s cotton nightgown