Joseph Nudelman emigrated from Russia in the 1880s, relocating to various states before going into business with his brother Eugene in Portland, Oregon in 1904. Nudelman Brothers formed an official partnership in 1917. They opened their first uniform store in Portland in 1920, and expanded to Seattle later in the 1920s. Regarding WW2, Eugene Nudelman (1906-1994) reminisced in 1974 “…we were serving many of the facets of the military by virtue of government edict. As a firm in the uniform business, we had to supply all the commissioned officers of the Army and the Navy and the Marine Corps with uniforms furnished by the government. We were paid a small fee for doing it. It was a necessary part of our business at that time.” Nudelman Brothers formally incorporated between 1945 and 1947. They continued to produce uniforms, and at the time of his 1974 interview with the Oregon Jewish Museum and Center for Holocaust Education, Eugene Nudelman was still working full-time for Nudelman Brothers. 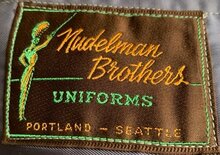