A native of Minnesota, Louise Norton Mulligan was born c. 1911. After an early marriage and some college work, in 1932 she started as an assistant/ handy girl at her aunt Mary L Cartwright’s Cartwright Company, a dress manufacturer in Minneapolis. She advanced to designer there, specializing in Junior fashions for college age women.

Mulligan began her own firm and label in Chicago in 1935, with factories there and selling around the country. By 1939, she was based in New York at 498 7th Avenue and was a member of the Fashion Originator’s Guild. Mulligan advertised extensively in college towns and even college newspapers. She continued with her own line until 1945, when she became the head designer at Carlye. 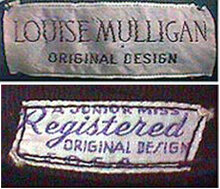 Courtesy of Hollis Jenkins-Evans
← previous next →