Anna Modeller was founded in 1958 in Torshälla, Sweden by Titti Wrange and her husband Bobbo and later established itself in Åhus in 1960. As children, her sister Lisa Larson, a famous ceramics designer, and Titti loved to draw clothes. Both wanted to be fashion designers, but only one of them realized her childhood dream.

Titti initially started making hats which became a huge success. After having her first child, she realized that there were no fun baby clothes so she created her own collection which became an even greater success and continued to be for many years.

While at the maternity ward, expecting her second son Jens, Titti brought rag sock yarn and a crochet hook to have something to do. She knit a whole cardigan in heather gray and edged in black, like a jacket. She wore it while visiting another prominent fashion designer, Katja of Sweden. At Katja’s home, Titti met people from the Olsson’s fashion house in Malmö who loved her work and started selling it, resulting in a large order.

Anna Modeller outgrew the place in Torshälla and needed a larger house to continue operations. In 1960, Titti and Bobbo moved to a large yellow villa in Åhus to be closer to both their partner and friend, Katja of Sweden, and to the sea. Full production of Titti’s collections was up and running in a couple of days thanks to some of her employees moving with her.

Anna Modeller became one of Sweden’s most successful fashion companies with shows in New York, Paris, and London. They built a factory that was completed in the early 1970s and at its peak, employed about 70 women. The US craze for stripes and fresh designs lasted throughout the decade but the recession came and with it, the US began backing up their own clothing designers. At the same time, the textile industry in Sweden found it increasingly difficult to cope with competition from low-wage countries. Anna Modeller produced their clothes in Sweden until the last textile factory closed down. In the 80s, they moved production first to Finland and then to Portugal. Anna Modeller stopped making children’s clothing in the 80s due to large chains entering the industry with cheaper clothing and customers not wanting to buy more expensive albeit quality pieces. By then, her women’s clothing had become a trendsetter. Through the years, Titti won many awards for her innovative clothes.

She ran the company herself into her 80s and had a store in Dedeberga. Its last season was in 2015 after which she moved to Stockholm to be with family. That summer she had an exhibition at Anders Hakansgarden which showed garments from the start in 1958 to 2015. Titti Wrange died on September 15, 2020 at the age of 87.

Together with Katja of Sweden, Annika Blom, and Maija Isola at Marimekko, Titti Wrange was one of the 60s and 70s most colorful textile designers. According to fashion writer Carina Adamsberg, “Titti was legendary, because she was both ahead of her time and right in her time.” 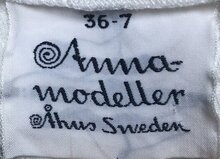