Milgrim was a specialty store that dated from, at least, the early 1920s in New York City and later with stores in Chicago, Detroit, Cleveland and other cities in the East. The designer at Milgrim was Sally Milgrim. As in other stores in the first half of the 20th century, Milgrim had both a custom salon and ready-to-wear clothes. They also imported and sold French designs. Milgrim ready-to-wear was sold in department stores around the country. One of the labels was “salymil,” a contraction of Sally Milgrim.

Sally Milgrim retired in 1960. The New York store was converted into a movie theatre. Some of the other stores remained open, with the last one, in Cleveland, closing in 1990. 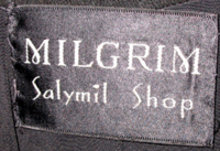 from a 1950s cocktail dress