William Lyle and Walter Scott founded a new knitwear company in the traditional manufacturing centre of Hawick on borrowed capital in 1874. Like Pringle, they moved from a concentration on fine-knit hosiery and chunky outerwear to the modern wardrobe of twinsets, sweaters and sportswear during the 1920s and 1930s. Its underwear lines were renewed in 1938 when Coopers of Wisconsin began to produce Y-fronts for the European market under a franchise agreement. Early stockists of the Coopers product were top menswear store Simpson Piccadilly.

In post-war austerity-ridden Britain, Lyle and Scott, like other Borders cashmere specialists, promoted their exports extensively in the United States; the campaign included special department store window displays, and the recruitment of the touring Sadlers Wells ballet company as ‘Fashion Ambassadors’. The company chairman, sailing to New York on the Mauretania in 1949 commented, ‘by wider and careful distribution, ‘Lyle and Scott’s’ are still highly prized possessions among the discriminating people of the Americas’ (Craftsmanship, June ’49). While the company’s fine cashmeres earned essential foreign currency overseas, Lyle & Scott’s own factory employees had difficulty obtaining rationed samples of the very twin sets they were manufacturing:

‘Scotch, inch-and-a-half-steaks, nylons and cashmere – things to dream upon, and like so many of our dreams, difficult to realise.’ Queen Magazine 1949.

In winter 1949-1950, Lyle and Scott introduced possibly their earliest label, a tripartite orange and white design which their American distributor promoted as a ‘hall-mark, which, by regular appearance, will encourage the immediate identification of our merchandise.’

In 1951, their U.S. representation was solidified with the establishment of Lyle & Scott Inc of 200 Madison Ave. This New York base may have prompted a collaboration around this time with Milgrim of 57th Street which is attested to in specially produced, heavily ornamented sweaters carrying a lighter golden variation of the tripartite label.

By 1954, Lyle and Scott embarked on a more ambitious collaboration with Christian Dior. A range of relatively simple but novel day-to-evening sweater designs – featuring scoop, square and collared necklines with low-key quirky details – were produced with a plain script ‘Creations Christian Dior’ label, again, principally for the North American market.

From approximately this point on, the main non-Dior label seems to have been one or two variations on a similar plain script format. At some point in the 1960s, this seems to have changed again to the large-font, deco-like grey and white label featuring the stylised cashmere mark, and size.

Lyle and Scott was bought by underwear manufacturer Wolsey in 1964, which in turn was swallowed by the giant Courtaulds in 1967. It was also in the late 1960s that Lyle and Scott launched dedicated golf wardrobes, and in 1967 introduced their distinctive Golden Eagle logo, often found woven on their menswear sweaters.

The Royal Warrant only appears on Lyle and Scott labels from 1975, when it was granted by HRH the Duke of Edinburgh. After another designer collaboration with Michael Kors in the 1980s, Lyle and Scott’s image languished in slight staidness during the 1990s. But like many traditional British specialist firms, they reacquired a fashion sensibility by 2000, when they revived 1970s and 1980s menswear golf designs in an exclusive ‘Vintage’ range, marked with the Golden Eagle.

In 2001 Lyle and Scott became an independent knitwear business, forming ‘Hawick Knitwear’ a year later with Clan Douglas. From 2002, the company adopted a modernized brand featuring the traditional script and its eagle motif and continues to exploit its heritage to cater to retro fashions. 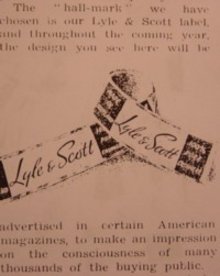 from a 1951/52 cardigan Milgrim collaboration label

from a 1950s cardigan-Script label

Courtesy of Eva Kisevalter
← previous next →