Jean Louis Berthault (1907-1997) was born in Paris, and as a young man worked at the House of Agnes-Drecoll. He went to New York in 1935, where he obtained a position with Hattie Carnegie. He worked there for seven years before heading to Hollywood in 1943. There he had a contract with Columbia Pictures, as an assistant to Travis Banton. When Banton left Columbia, Jean Louis was made the head designer there.

Jean Louis worked in the movies, first at Columbia, and later at Universal. During this time he also did the private wardrobes of many of his star clients, including the television wardrobe for Loretta Young in 1953.

In 1961 he left the studios to form his own design firm, Jean Louis, Inc. He specialized in cocktail and evening dresses and suits. He also freelanced for the studios. Jean Louis retired from designing in 1988.

It was Jean Louis who designed the infamous “Happy Birthday, Mr. President” dress, worn by Marilyn Monroe in 1962 as she sang at JFK’s birthday party.

from a late 1960s classic jacket 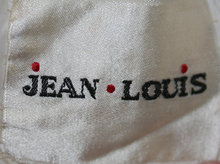