Arthur Lasenby Liberty (1843-1917) was born in Chesham, Buckinghamshire, the son of a draper. When Liberty was sixteen, he worked first for an uncle who owned a lace warehouse, and he then went to London to work in another uncle’s wine business. In 1859 he was apprenticed to a draper, but the apprenticeship was ended after two years with both parties in agreement. He then found a position at Farmer & Rogers’ Great Shawl and Cloak Emporium, a position that was to set him on the course of his life’s work.

In 1862, Farmer & Rogers opened an Oriental importation business – one of the first such businesses – and Liberty was put to work in this Oriental Warehouse. Here he gained an appreciation for and knowledge of Oriental ceramics, textiles and other arts. After being the manager of the Oriental Warehouse for over ten years, and seeing no chance for advancement within the company, Liberty decided to open his own business selling Oriental imports. This shop, first called the East India House, was opened by Arthur Liberty in 1875. The original store was on Regent Street, and they sold mainly objects from the East – rugs, fabrics and decorative objects. Liberty was likened to an Eastern Bazaar, and it came to be a meeting place for artists, and in time became an important part of the Aesthetic Movement.

Within a few years, Liberty’s Oriental fabrics were so popular that the store had a difficult time meeting the demand they had created. At the same time, the quality of goods being imported was starting to drop. Liberty began to import undyed silk, cashmere and cotton fabrics, which were then handprinted in England, in the style of Oriental fabrics. During this time the company developed a soft palette of colors, which became known as “Liberty colors”.

In 1884, Liberty established a costume department, in which clothing was designed and made from Liberty fabrics and which was in tune with the artistic philosophy of the rest of the store. Liberty maintained their own costume workrooms in which clothing was produced. The goal was not to make clothing that followed fashion; it was to make clothing based on historical costume, reinterpreted for the modern wearer. These were not clothes for the average tightly corseted woman of 1884, but instead were more in keeping with the taste of the Aesthetic Movement.

In 1890, a branch of Liberty’s was opened in Paris, France, (closed in 1932) and another in Birmingham. By this time twelve cities in Britain had shops that offered Liberty products, and there were agents around the world who were associated with Liberty, including ones in New York, Boston and Chicago.

Liberty was one of the first to embrace the new Art Nouveau style in the mid 1890s. They became known for their textiles in this style, some of which are still produced today.

As the Aesthetic Movement began to lose favor, and the Belle Epoque was ushered in, Liberty saw the need to make fashions that were more stylish, but at the same time they continued to make classically draping aesthetic dresses. The catalogues became divided into two sections – Novelties for the New Season, which showed the latest fashions, and Costumes Never out of Fashion, which continued to feature the Empire silk gowns in classical style. This division of the catalogue continued at least until the mid 1920s.

In 1925, a new store was opened in Great Marlborough Street. This store was in the Tudor Revival style, and it still houses Liberty. Also in the 1920s, Liberty began to produce small floral prints that became known as Liberty Prints. The best known of the fabrics of this time is the Tana Lawn, which is still a Liberty best-seller.

By the late 1920s, Liberty was considered to be quite old-fashioned, fashion-wise. In 1926, it was noted that not even the colors of the fabric prints had changed since 1920, and they were still using the out-moded term, “Costume Department” in reference to their clothing selection. In 1932, in an effort to maintain a connection with Paris, and to up-grade the image of their fashion department, Liberty’s hired Paul Poiret to design for them, not realizing that he was completely out of step with the march of fashion. He designed four collections for Liberty’s, in 1932 and 1933.

Over the years, many of the world’s best designers have used Liberty fabrics. Jean Muir (who worked at Liberty for a time), Cacharel and Mary Quant are just a few. Many of these designs, especially those of the late 1960s and early 1970s, reflected well on the Liberty legacy of romantic designs.

Today Liberty is still known for the fabrics and scarves that made them famous. They also have an in-house designer, while continuing to carry designs from other top designers. 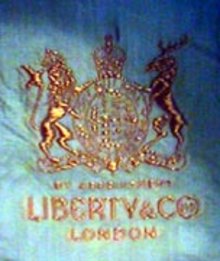 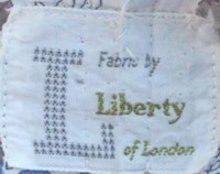 from an early 1950s wool dress

from a mid 1960s shirtdress

from a 1970s dress made with Liberty fabric

Courtesy of sixcatsfun
← previous next →