Liberty House was a department and specialty store chain. It was founded in 1849 in Honolulu, Hawaii as the Hackfield Dry Goods Store, by Captain Heinrich Hackfeld, from Bremen, Germany. In 1852, the store was renamed B.F. Ehlers, who was the nephew of Hackfield, and the new owner of the store. In 1918, the name was changed to Liberty House, partly as a reaction to WWI and to break the negative connection with its Germany roots.

In 1937 a second store was opened in the Waikiki area. Eventually there would be seven stores on Oahu, and several more on the other islands. During the 1970s it expanded into California, Nevada and Washington, but the Washington stores were sold in 1979 and the California and Nevada locations were sold in 1984.

Liberty House declared bankruptcy in 1998. In 2001 the company was bought by Federated Department Stores and all remaining stores were changed to Macy’s stores.

from a 1940s rayon Hawaiian dress 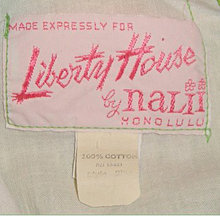 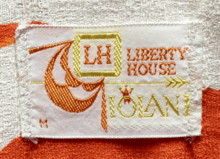 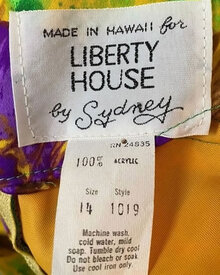 from an early 1970s maxi dress 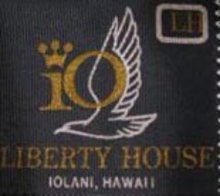 from a late-1970s Hawaiian shirt