Lee Apparel Company was started by Henry David Lee in Salina, Kansas. Lee and several associates had gone into the wholesale dry goods and grocery business, and they started producing work clothing due to poor deliveries from factories in the East. In 1911 they opened a factory which made work pants and jackets. Two years later they unveiled the Union-all, a cover-all garment made of a jacket and pants sewn together at the waist.

Lee made these for the military in WWI, and after the war they expanded their clothing inventory. In the 1920s they added a cowboy pant made of denim – blue jeans. As time went on the company geared its advertising and products toward the cowboy trade.

After WWII, Lee began to market their jeans not just as work clothes, but as fashion items. They made a jeans just for women, the Lady Lee Rider. In 1954 they began to make other sportswear in addition to jeans. This trend continued, with basics such as chinos being added to Lee’s production.
In 1967 the company was sold to VF, the parent company of Vanity Fair. 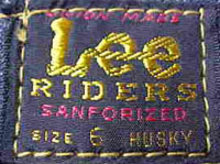 from a pair of early 1970s peace sign print jeans