Lanz was started in Salzburg, Austria in 1922, by Josef Lanz and Fritz Mahler. They supplied traditional folkwear costumes for Austrians attending the Salzburg music festival (remember The Sound of Music?). They noted their costumes were also bought by tourists (Americans) traveling to Austria in the 1920s and early 1930s.

In the mid 1930s, Josef Lanz left Austria, leaving the company there in the hands of other family members, and went to New York, where he opened a new branch of the business in 1936. About this time the hallmark Lanz heart appeared on Lanz labels.

At the beginning of WWII, the label included “Vienna” when they relocated their HQ there in 1939. After the war, Lanz began to expand their business by creating fashions that were inspired by traditional Austrian folkwear, but followed the lines of current fashions.

Lanz of California was established in the 1940s, and they began to manufacture Austrian-inspired clothing in the US. By the early 1950s, the Lanz of California label was owned by Nornie and Werner Scharff, and the European and American companies were totally independent of one another.

Lanz of California may have been a different company, but the designs still had a strong Old World influence. The chief designer was Nornie Scharff, and she and Werner spent a great deal of time each year in Europe buying fabrics.

By 1978, there were two Lanz companies in the US, Lanz Originals, which was still making dresses, and Lanz of Salzburg, a sleepwear maker. Around 2001, Lanz Originals stopped production.

There are still two Lanz companies today. The Austrian company is still owned by the Lanz family and produces traditional Loden suits and dirndls, as well as contemporary fashions with folkloric detailing. The American company, Lanz of Salzburg, still makes primarily women’s sleepwear.

Lanz garments can be particularly difficult to place a date on, due partly to the fact that many of the modern things have a vintage look to them. Another difficulty is that Lanz clothing was originally based on traditional Austrian trachten, and the clothes were never intended to be “fashion-forward” in the first 30 years of the company. After 1952, when the American company was bought by the Scharffs, the lines became more in line with mainstream fashion, but there was still a very strong European folkloric influence.

Also, there is a big problem with the overlapping of names and trademarks. Both the Austrian and the American companies used a form of the Lanz heart design. The Austrian company still uses it, and the current label is very similar to label #1. Be aware that the presence of that label in a garment does not guarantee that it is 70 years old!

Also, the USA label seems to have changed in 1956, and a copyright date was put on that label. The 1957 date has been found on garments dating to the early 1960s, so please note that the copyright seems to be for the label design, not for the actual garment. 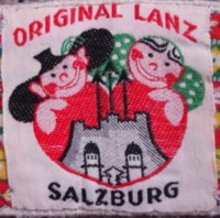 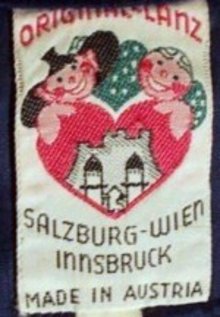 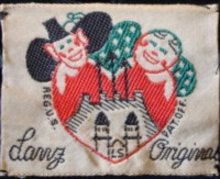 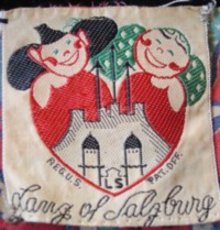 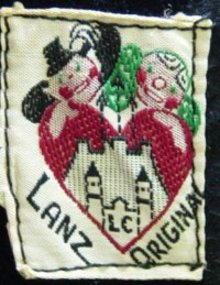 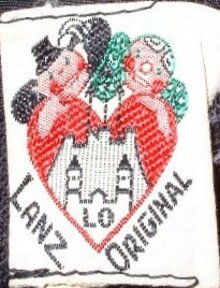 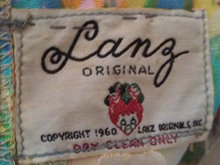 Courtesy of robin of frocksley

from an early 1970s jeans dress 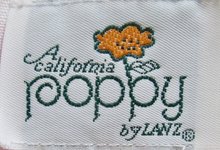 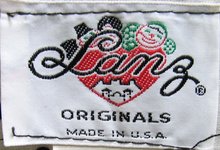 Courtesy of vntagepretties
← previous next →