Landlubber was a jeans and denim label, started in 1964 by the Hoffman Corporation of Boston. During the early 1970s, they were THE cool jeans to wear, both their bellbottom jeans and cute jean dresses and skirts. The label was briefly relaunched in the early 1990s.

from an early 1970s jeans dress 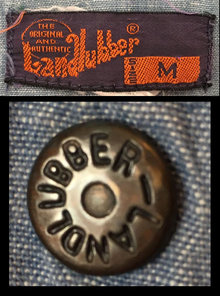