1964 was a big year for Susan “Susie” Kosovic. She opened her first boutique on Yonge Street in Toronto and launched her “Poupée Rouge” label. She was featured on the cover of McLean’s magazine in 1966, the first Canadian designer to be featured on its cover. In the magazine article, Vidal Sassoon referred to her as “Canada’s Mary Quant – but with her own thing”. Within a few years, she had three stores in Toronto, including one in Yorkville, one in the Le Cartier apartment building in downtown Montreal, and a boutique in the Hudson Bay Co. store in Winnipeg. In 1969, Kosovic began to design a unisex line for the Fairweather department store chain, and during the mid ’70s, opened a store called “John Alexander”. At this point she was using Susie Hayward as her name, going on to have a long career in the fashion industry. 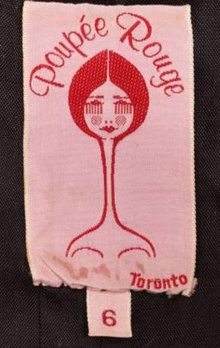 Courtesy of poppysvintageclothing
← previous next →