The Kosins family emigrated to the USA from Poland and Max Kosins was the first born child in the United States. Max and his wife Helen started a business pressing and tailoring clothing in their shop in Detroit. Soon, recognizing his skills, more and more people began asking Mr. Kosins to make complete garments. It soon grew into Kosins Clothes. Very early labels may say “Max Kosins” rather than “Kosins Clothes.”

Son Harry Kosins aspired to be a lawyer, but in the 1940s was sent off to war. When he returned, he assisted his parents with the family business and soon began taking the helm. The business became widely known as the place to go in Detroit for high end men’s clothes. Harry Kosins became internationally regarded among merchants and buyers in the industry, having gone to trade shows in person, and having had a strong business sales ethic. According to daughter Kathy, “If a man walked in looking for one suit, he would walk out with ten.” He not only created his own garments, clothing many Motown greats such as the Four Tops, he also had many other manufacturers make items exclusively for his shop.

There was a special “back room” that featured the most exclusive garments. These were quality items that the movers and shakers of the day – politicians, lawyers, and celebrities – would see in a private viewing.

Kosins closed in the early 1990s, having been run by brother Ben for a few years after Harry’s retirement. The old Kosins Big and Tall store location was purchased and is now Rochester’s Big and Tall. The original Kosins Store in Detroit burned down in a fire some time after Mr. Kosins’ retirement. 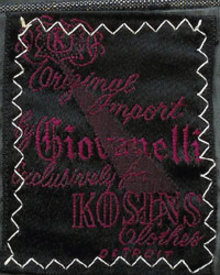 from an early 1960s sharkskin suit 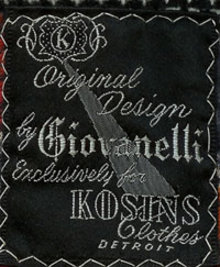 from a 1960s cashmere blazer