Carole King was established in 1937 by the Forest City Manufacturing Company of St. Louis. They were a maker of better junior dresses and were a leader in that market. Grace Dozier Durocher (second wife of baseball great Leo Durocher) was partner in the company and designer of the Carole King line. Forest City Manufacturing also produced other junior lines, including Shirley Lee and Doris Dodson.

During the 1930s and into the 1950s, St. Louis was a major producer of junior dresses and was known for this product. In the 1940s, over 500 different lines of Junior wear were produced in the city and surrounding area. 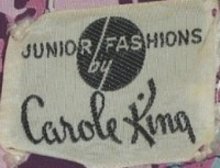