Julius Kayser founded his silk glove company, Julius Kayser & Co., in New York in 1880. By 1908 the company was advertising their black silk hosiery, in addition to their ‘famous silk gloves.’ Julius Kayser & Co. (of Hornell, NY) was incorporated in June 1911 ‘to do a general merchandise business’ and ads at that time noted that they were ‘manufacturers of silk gloves, hosiery, underwear, etc.’ Advertisements from 1912 tout their fabric gloves and “not patent leather gloves” and that they marketed their products “in Canada, England, France, Italy, South America, and even Germany” where they had a glove factory at Muhlau.

In 1947 the company acquired the capital stock of the Nazareth Waist Company of Nazareth PA. Other subsidiaries included the Julius Kayser Company, Ltd. of Canada, and the Belton Hosiery Mills of Belton, S.C. In May 1954 a group headed by Mr. Feinberg, Mr. Goldsmith, and Benjamin Heinerfeld gained control of Kayser. The new owners hired designer John Norman for their lingerie line. At about that time Kayser bought the Corrette Corporation, a manufacturer of women’s slips and petticoats and acquired Catalina, Inc., producers of sportswear and swimsuits, thus establishing Kayser as one of the largest manufacturers of apparel and accessories in the nation.

1955 saw a consolidation of enterprises under one roof at 425 Fifth Avenue. The divisions of Kayser & Co. that were slated to occupy space in the new fashion center were the Kayser Division, at 500 Fifth Avenue since 1932, maker of ladies’ lingerie, hosiery, fabric clothes, children’s underwear and sleepwear; the Holeproof Company, men’s hosiery and underwear and ladies’ hosiery; Catalina division, swimwear and sportswear; Diamond division, maker of Fruit-of-the-Loom ladies’ hosiery; Corette, ladies’ lingerie; Nazareth, infants’ and children’s underwear and sleepwear; Sherman Underwear Mills, and Guttman-Mayor Gloves.

Kayser Bondor
Kayser Bondor is a UK lingerie and hosiery brand. It began in 1928 as The Full-Fashioned Hosiery Co founded by philanthropist and businessman John Goodenday. It registered the brand name ‘Fulfa’ in 1929 and ‘Bondor’ in 1931.

In 1936 The Full-Fashioned Hosiery Co collaborated with American company Julius Kayser & Co to form Kayser Bondor Ltd, which made and sold goods with the Kayser name in the UK.

Kayser Bondor advertised extensively and became a well-known brand. In 1947 it had four factories in the UK, two in Merthyr Tydfil, Wales, one in Baldock, Herts, and one in Biggleswade, Beds. The firm supplied Marks & Spencer with lingerie for its St Michael label. Originally controlled by the American company, at some point it became more independent but continued to benefit from a close association with its former parent.

In 1946 The Full-Fashioned Hosiery Company became Bondor Ltd. In 1953 Bondor Ltd bought the Kayser Australian subsidiary from Julius Kayser & Co, and in 1955 acquired the rights to the Kayser name. Kayser Bondor Ltd was taken over by Courtaulds in 1966. By the 1980s Kayser Bondor was known as Sheers.

Kayser in Australia
In 1930 Julius Kayser & Co collaborated with Australian Knitting Mills Ltd to form Julius Kayser (Australia) Pty., Ltd. It opened a plant in Melbourne in the same year. In 1953 Julius Kayser sold its Australian subsidiary to UK company Bondor Ltd, which was later acquired by Courtaulds in 1966. As of 2013 the Australian Kayser brand is now owned by Simon de Winter. 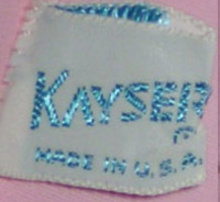 from an early 1960s nightgown 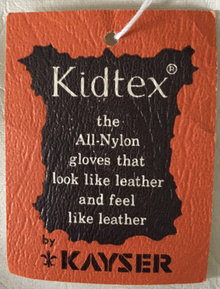 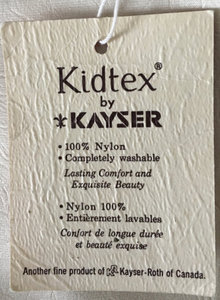 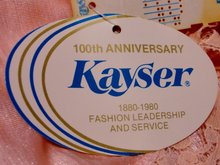 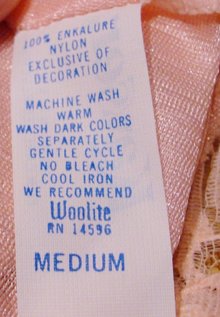 Courtesy of mngreeneyelady
← previous next →