Jordan Marsh was founded in Boston by Benjamin Marsh and Eben Jordan, with conflicting reports stating the year as 1841 or 1851. Eben Marsh is well known for later buying large amounts of property in Boston’s Back Bay District and building theaters.

In 1935, the Jordan Marsh company founded Allied Department Stores, which was previously named Hahn, a holding company that began to purchase local department stores to give them big chain advantages. They also eventually acquired Sterns in Ohio, William H. Block in Indianapolis, Rikes, and others. In 1958, an 18 year old Ralph Lauren was hired as assistant menswear buyer for Allied Department Stores.

Allied was purchased by the Campeau corporation in 1986, and it was reorganized under a merger agreement. Campeau sold Bloc to Federated Department Stores, and the next year purchased Federated Department Stores. The two conglomerates operated in a parallel manner until a bankruptcy and reorganization in 1992, and Allied was no longer. The new Federated merged with Macy’s in 1994 and most of the old nameplates were converted to Macy’s or lost forever. In 1994, Jordan Marsh stores were renamed Macy’s.

Though it is gone, it is not forgotten. Many Bostonians still refer to their visit to Macy’s as “going to Jordan Marsh.”

from an early 1920s silk kimono 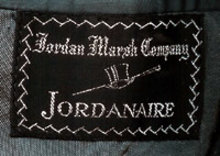 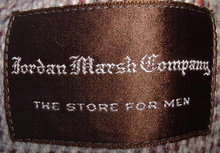 Courtesy of coutureallure.com
← previous next →