In 1977 Florida model Peggy Jennings and her friend Mary Hellman, also a model, opted for a career change and began designing the “soft, pretty clothes, good clothes” they liked. Under the trademark Lion’s Paw Inc., their original six designs grew to 25 and sold well.

In 1980 Lion’s Paw Inc. was dissolved and Peggy Jennings and her husband/partner, Herbert Kosterlitz, established the new corporation that became Peggy Jennings Designs Inc. Jennings was known for her romantic clothes and couture lingerie, expressed through features such as high necks, satin bows, and her signature antique laces from France and Switzerland.

Throughout her career, Jennings quietly dressed governors’ wives and First Ladies—including Laura Bush and Hillary Clinton—in her dresses and separates made with fine silks, cashmeres, wools, linens, satins, and chiffons, from fine European fabric houses. A devotee of Jennings’ designs noted, “One of Peggy’s things is magnificent fabrics.”

By at least 2005 Peggy Jennings was based in NY and manufacturing in St. Petersburg, FL. From about that time until 2017, Peggy Jennings designs were featured in trunk shows and by 2020 contact information on the Peggy Jennings Designs website was no longer viable. 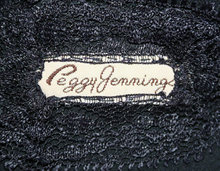