Horrockses was founded in 1791 in Preston, UK as a cotton manufacturer. In 1946 the company started Horrockses Fashions Limited and the Horrockses label was born. The clothing was designed by designers in London, using the cotton that was designed and produced by the Horrockses Mill in Preston. Most of their garments were made from their cotton, but they also used other fibers that were bought from other makers.

During the 1950s Horrockses was famous for their colorful cotton floral prints, which were made into full-skirted summer dresses. These dresses were popular not only in Britain where they were made, but they were also imported into the US, where they could be found at upscale stores such as B. Altman. The dresses, even though they were only cotton day dresses, were not cheap and were very well made. The company worked at improving the image of cotton and they were very successful.

The company’s top designers left in 1958 and the company was sold to Steinberg & Sons in 1964. The label was discontinued in 1983. 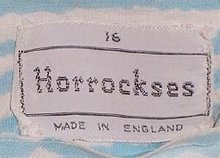 from a 1950s cotton ballgown

Courtesy of ourbabyroo
← previous next →