Pam Hogg launched her first collection in 1981. She was, along with Bodymap, one of the new wave of designers who emerged at the beginning of the 1980s in London. Completely self-taught and a bit of a fashion renegade, Hogg first sold out of Hyper Hyper in London and later from her own shop in Newburgh Street, always refusing to ‘sell out’ to the mainstream fashion industry (she once stuck a piece of paper in the entrance to her shop proclaiming that “fashion is a pile of s**t”).

Her clothes are typically tight, loud, and fetish-influenced and are always inspired by the current club scene — her influences have been drawn from punk, the ‘blitz’ scene and, later, acid house. Her collections were always inventively named, from 1981’s Psychedelic Jungle to 1989’s Warrior Queen and including ‘Best Dressed Chicken in Town’, ‘And God Created Woman’ and ‘Wild Wild Women of the West’. Pam continues to design and is also the lead singer in a group named ‘Doll’.

from a 1990s velvet bustier 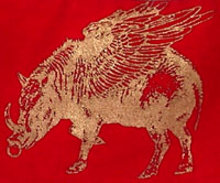