Norman Hartnell (1901-1979) began designing in 1923, working for a London dressmaker. Shortly thereafter he opened his own business and by 1927 he was showing in Paris. In 1937 he was appointed dressmaker to the Royal Family. He made Elizabeth II’s wedding dress and, in 1953, her spectacular coronation gown.

Hartnell was renowned as a designer of gowns, but he also excelled at tailoring tweed suits and coats. During World War II he designed women’s uniforms for the British military and for the Red Cross. He also worked to design stylish clothes that met the rationing demands of the day.

He started in ready-to-wear in 1942. By the end of the 1940s he was also designing for Berketex. After Hartnell’s death in 1979, the House of Hartnell remained open. It went though a succession of designers, including Murray Arbeid and Victor Edelstein. Finally, Marc Bohan was brought in, but Hartnell closed in 1992. 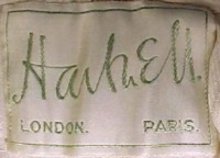 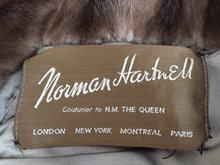